In the previous tutorial, we learned all about the cornerstone of RxJS, which are observables, observers and subscriptions.

In this tutorial, we're going to learn about different types of observables called Subjects, and each type of subject offers a slightly different capability depending on your use case.

Let's create a Subject using the project from the previous tutorial, and let's get started with the following code in /src/code.ts:

As you can see, creating an actual Subject is ridiculously simple.

Next, we have to .subscribe to the Subject to create an observer:

If you save the project, at this point nothing happens. We have to use .next to start emitting values from the observer:

Now, if you save the project, we'll see the following output:

Simple enough, but let's make it more interesting by defining another observer and pushing some more values:

We can see that the 2nd observer doesn't receive 'The first thing has been sent' but only the values emitted after it was created.

Let's try unsubscribing the second observer and sending a value after it. This will include the full code up to this point:

This results in the following output: 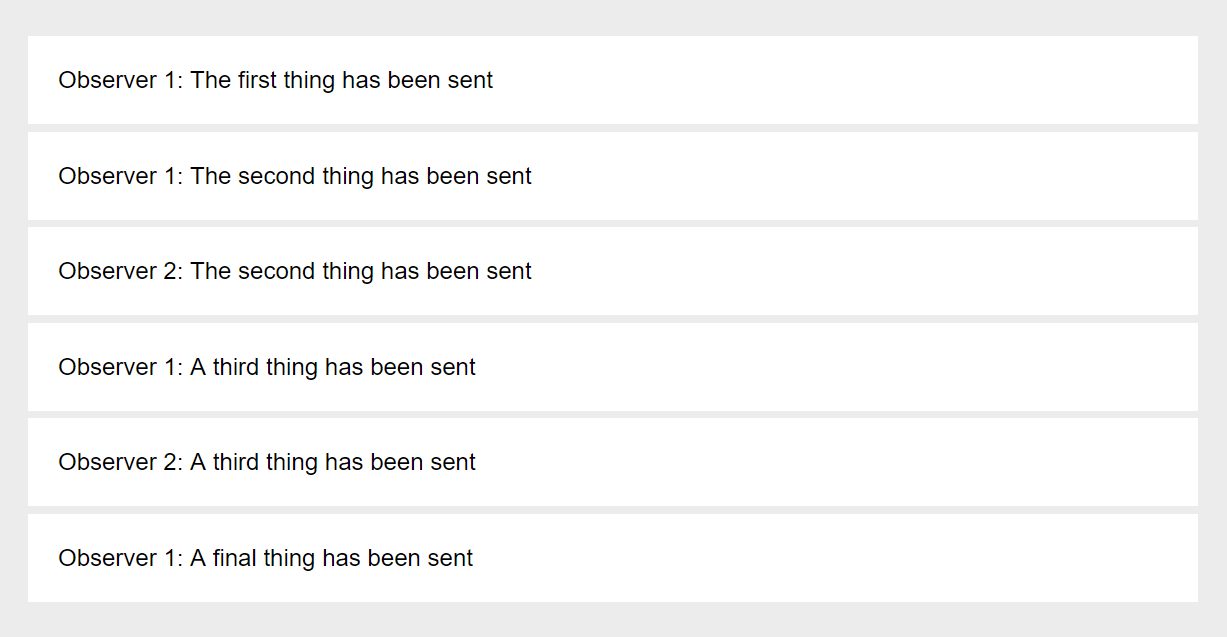 Great! We can see that the first observer is still receiving data but the second no longer does.

We've just created a regular Subject, but what about BehaviorSubject?

BehaviorSubject is a special type of Subject whose only different is that it will emit the last value upon a new observer's subscription.

For instance, in the above example of a regular Subject, when Observer 2 subscribed, it did not receive the previously emitted value 'The first thing has been sent' -- In the case of a BehaviorSubject, it would.

Let's create a BehaviorSubject using our existing code. Simply change lines 1 and 3 to the following:

Also, just after our first call to .next(), make the adjustment:

If you view the result in the browser, you will see that Observer 2 received the last emitted value, despite being created after it: 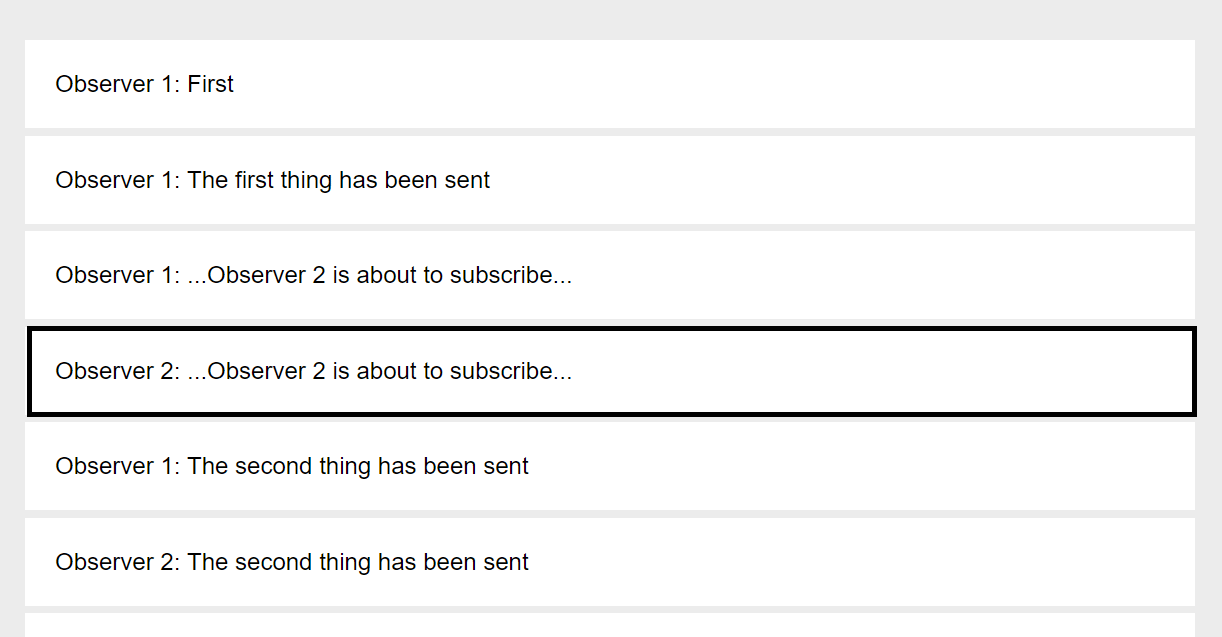 That's all there is to BehaviorSubject.

Another variation of the Subject is a ReplaySubject.

Let's give it a try in our project:

Also, let's once again make adjustments to our .next() calls:

The result in the browser reveals that Observer 2 received the last 2 emitted values:

See? All of this stuff is easy to understand.

To demonstrate this, we're going to make a number of changes:

On line 3, we're saying return the last 30 emitted values (events) ...within 200 milliseconds of a new subscription.

Then, we're using setInterval() to call .next() to dispatch a new event every 100 milliseconds.

Then, we create our second observer after 500 milliseconds.

The result in the browser: 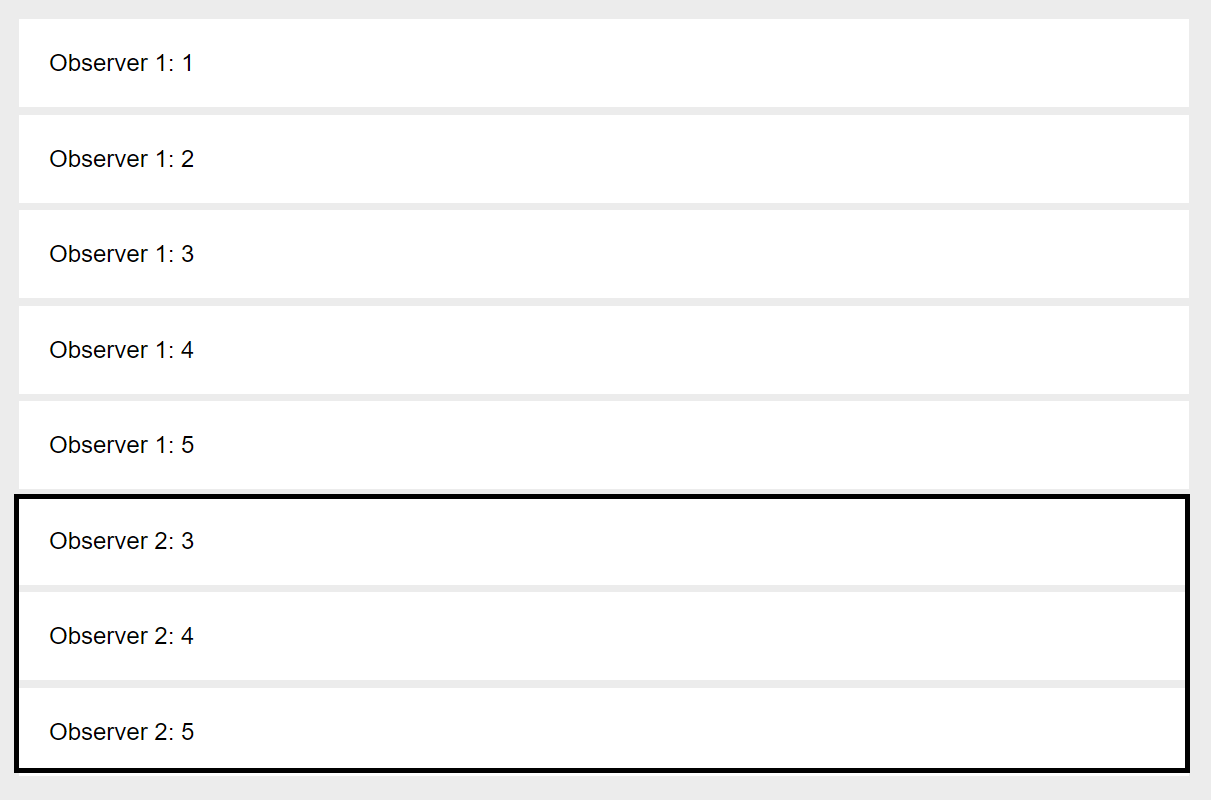 If you try changing the window time on line 3 from 200 to 500, Observer 2 will receive all 5 emitted values, because they occurred within 500 milliseconds.

This is the last subject variation, and it's perhaps the most simple to understand.

AsyncSubject only emits the very last value, and will only do so once .complete() has been called on the subject.

Using our example from above, let's make some slight adjustments as shown below:

Notice that we're calling subject.complete() in the setTimeout() call near the bottom.

This is the result:

In the next section, we're going to take a look at operators.