In the previous tutorials, we discovered how to create Observables (along with special observables called Subjects) and subscribe to them.

That's only part of RxJS, though. RxJS offers an extensive collection of operators. There are well over a 100+ operators in RxJS that you can use with observables.

In this tutorial, we're going to...

What is an RxJS Operator?

Operators are simply methods that you can use on Observables (and Subjects) that allow you to change the original observable in some manner and return a new observable. These operators do not change the existing Observable; they simply modify it and return a new one. Operators are known as pure functions, which are functions that do not modify the variables outside of its scope.

You can also create a sequence of operators that will modify an incoming observable, output a new observable, and so on..

There are also two types of operators:

The official documentation uses marble diagrams to help you understand how a given operator modifies an observable.

Here's the official explanation of how a marble diagram works:

In other words, at the top you have the original observable along with their events emitted from time that goes left to right. In the middle it states the name of the operator, and then the newly transformed observable is at the bottom.

If you take a look at the official documentation for categories of operators, you would see that there are several categories to choose from:

Depending on what you want to do with the incoming observable, you would choose an operator from one of these categories.

Let's say that we wanted to merge two separate observables into one. This merge operator is combining two observables, so it falls under the Combination category.

Here's what the marble diagram looks like for merge: 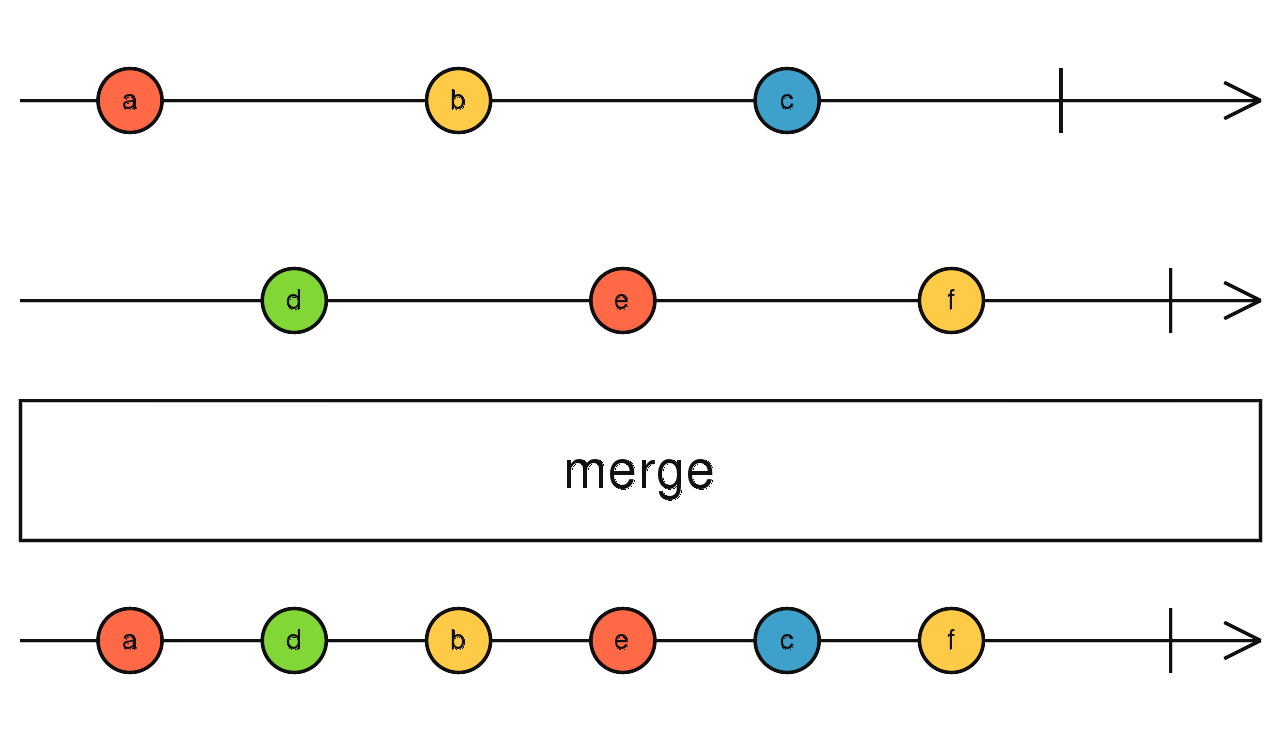 Two observables up top, and a new one at the bottom that merges them. Let's give it a go!

In your /src/code.ts file, specify the following:

You can see that we have 2 observables observable and observable2. Then, we use the merge operator to merge both observables, and then we subscribe to the new observable.

Map is one operator that you see a lot when working within Angular and API's. It simply allows you to take the input values and make some type of transformation.

So, if we wanted to multiply numbers, append a string to the end of events, or make all of the results capital, we could use .map:

Note: Above is a less verbose way of achieving the same results from the previous example:

Let's say your observable emits an array of objects with multiple properties, but you only need a single property?  Well, you can pluck that property from the original observable, and return a new observable with just that property:

So, try the following code with the pluck operator:

Try updating the code to the following:

Our first observable observable1 is just a regular observable that uses setInterval() to emit an integer that increases by 1 every second.

Our second observable is a Subject (a special observable that we covered in the previous tutorial) that we simply define but don't immediately emit any values.

We use setTimeout() to create a 3 second delay before emitting a value from our second observable.

Then, we use skipUntil() to create a third observable.

We only see 3 because we've skipped 1 and 2 because they didn't occur after the second observable began emitting events.

As you can see with the amount and variety of RxJS operators, you have an immense amount of flexibility when working with observables.

At this point, you should be feeling quite comfortable with RxJS!