Ever since the release of Angular 2, I have created a full course for each new iteration. Today is no different, as Angular 7 just released!

With this beginner's crash course, I make the assumption that you have never worked with Angular before. Therefore, this tutorial is perfectly suited towards a beginner with no prior Angular experience. The only thing you should be familiar with is HTML, CSS and JavaScript.

In this course, you're going to discover just how powerful Angular 7 is when it comes to creating frontend web apps. Let's get started!

Getting Started with Java

In your command line, type:

Once complete, you can now access the CLI by simply starting any commands with ng.

Hop into whichever folder you want to store your projects, and run the following command to install a new Angular 7 project:

It's going to present you with a couple questions before beginning:

It will take a minute or two and once completed, you can now hop into the new project folder by typing:

Open up this project in your preferred code editor (I use Visual Studio Code, and you can launch it automatically by typing code . in the current folder), and then run this command to run a development server using the Angular CLI:

-o is for open, this flag will open your default browser at http://localhost:4200. Tip: You can type ng to get a list of all available commands, and ng [command] --help to discover all their flags.

Awesome! If all went smooth, you should be presented with the standard landing page template for your new Angular 7 project: 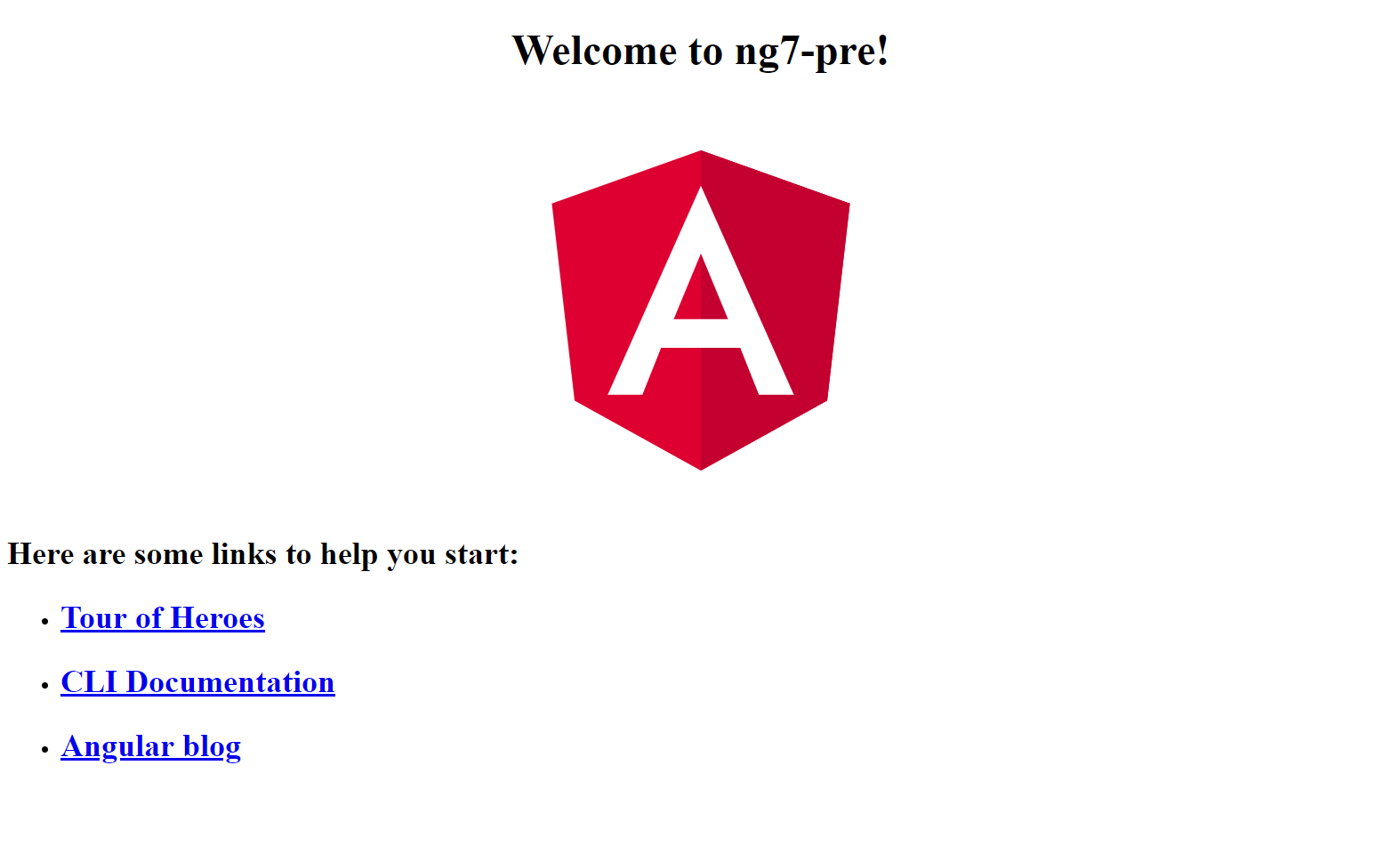 The most basic building block of your Angular 7 application (and this is a concept that's not new) is the component. A component consists of three primary elements:

When we use the Angular CLI to start a new project, it generates a single component, which is found in /src/app/:

While we have three files here that represent the three elements above, the .ts (TypeScript) is the heart of the component. Let's take a look at that file:

Here, because this is a component, we're importing Component from the @angular/core library, and then it defines what's called a @Component decorator, which provides configuration options for that particular component.

As you can see, it's referencing the location of the HTML template file and the CSS file with the templateUrl property and the styleUrls property.

The logic of the component resides in the class at the bottom. As you can see, the CLI starter template simply defines a single property called title.

Let's use the Angular CLI to create our own components that we'll need going forward. In the console, issue the following commands:

Notice we first use the full syntax to generate a component, and then we use a shorthand syntax, which makes life a little bit easier. The commands do the same thing: generate components.

When we generate components this way, it will create a new folder in the /src/ folder based on the name we gave it, along with the respective template, CSS, .ts and .spec (for testing) files.

You may have noticed that one of the components we generated was called nav. Let's implement a header bar with a navigation in our app!

The first step is to visit the app.component.html file and specify the following contents:

So, we've removed a bunch of templating and placed in <app-nav></app-nav>, what does this do and where does it come from?

Well, if you visit /src/app/nav/nav.component.ts you will see that in the component decorator, there's a selector property bound to the value of app-nav. When you reference the selector of a given component in the form of a custom HTML element, it will nest that component inside of the component it's that's referencing it.

If you save the file you just updated, you will see in the browser we have a simple, nav works! And that's because the nav.component.html file consists of a simple paragraph stating as much.

At this point, let's specify the following HTML to create a simple navigation:

The only thing that might look a little strange is routerLink. This is an Angular 7 specific attribute that allows you to direct the browser to different routed components. The standard href element will not work.

While we're here on the subject of templating, what if we wanted to display properties that are coming from our component? We use what's called interpolation.

Make the following adjustment to our template:

Interpolation is executed by wrapping the name of a property that's defined in the component between {{ }}.

Let's define that property in nav.component.ts:

You can use the TypeScript way of defining properties or standard JavaScript. Save the file and you will see myapp is back in the template.

There's a lot more to templating, but we will touch on those topics as we continue. For now, let's apply style to our header.

If you save and refresh, this should be the result in the browser:

Now that we have a navigation, let's make our little app actually navigation between our components as needed.

Open up /src/app/app-routing.module.ts and specify the following contents:

As we can see here, we're defining importing our components and defining an object for each route inside of the routes constant. These route objects also accept other properties, which allow you to define URL parameters, but because our app is simple, we won't be doing any of that.

Save this file and try clicking on the links above. You will see that each of the respective component's HTML templating shows up in the <router-outlet></router-outlet> defined in app.component.html.

This is what the result should look like in the browser at this point:

You now know enough about Angular 7 to create a very simple website with routing!  But let's learn more than that.

In the next several sections, we're going to use our /src/app/home component as a playground of sorts to learn features specific to Angular 7.

One of the most used forms of event binding is the click event. You often need to make your app respond when a user clicks something, so let's do that!

Visit the /src/app/home/home.component.html template file and specify the following:

You define an event binding by wrapping the event between (), and calling a method. You define the method in the home.component.ts file as such:

Save it, get out the browser console (CTRL+SHIFT+i) and click on the button. The output should show clicked. Great!

You can experiment with the other event types by replacing (click) with the names below:

Sometimes you may need to change the appearance of your UI from your component logic. There are two ways to do this, through class and style binding.

There are a lot of different methods you can use to control class binding, so we won't cover them all. But I will cover some of the most common use cases.

Let's say that you want to control whether or not a CSS class is applied to a given element. Update the h1 element in home.component.html to the following:

Here, we're saying that the CSS class of .gray should only be attached to the h1 element if the property h1Style results to true. Let's define that in the home.component.ts file:

Save it, and you can now click on the click me button to change the color of the Home title.

What if you wanted to control multiple classes on a given element? You can use ngClass. Modify the home component's template file to the following:

Then, add the large ruleset to the .scss file:

Now give it a shot in the browser. Home will appear large, but shrink down to the regular size when you click the button. Great!

You can also control appearance by changing the styles directly from within the template. Modify the template as such:

Refresh and give this a shot by clicking the button.

Like ngClass() there's also an ngStyle() that works the same way:

Give this a go! Awesome!

Services in Angular 7 allow you to define code that's accessible and reusable throughout multiple components. A common use case for services is when you need to communicate with a backend of some sort to send and receive data.

Open up the new service file /src/app/data.service.ts and let's create the following method:

To use this in a component, visit /src/app/home/home.component.ts and update the code to the following:

There are 3 things happening here:

If you try this, you will see that it works as clicked will be printed to the console. Awesome! This means that you now know how to create methods that are accessible from any component in your Angular 7 app.

Angular comes with its own HTTP library that we will use to communicate with a fake API to grab some data and display it on our home template. This will take place within the data.service file that we generated with the CLI.

In order to gain access to the HTTP client library, we have to visit the /src/app/app.module.ts file and make a couple changes. Up until this point, we haven't touched this file, but the CLI has been modifying it based on the generate commands we've issued to it.

Add the following to the imports section at the top:

Next, add it to the imports array:

Now we can use it in our /src/app/data.service.ts file:

reqres.in is a free public API that we can use to grab data.

Open up our home.component.ts file and modify the following:

The first thing you might notice is that we're placing the code inside of the ngOnInit() function, which is a lifecycle hook for Angular. Any code placed in here will run when the component is loaded.

We're defining a users property, and then we're calling the .getUsers() method and subscribing to it. Once the data is received, we're binding it to our users object and also console.logging it.

Give it a try in the browser and you will see the console shows an object that's returned. Let's display it on our home template!

Open up home.component.html and specify the following:

Great! Let's specify some CSS to make this look better in home.component.scss:

View the result in the browser: 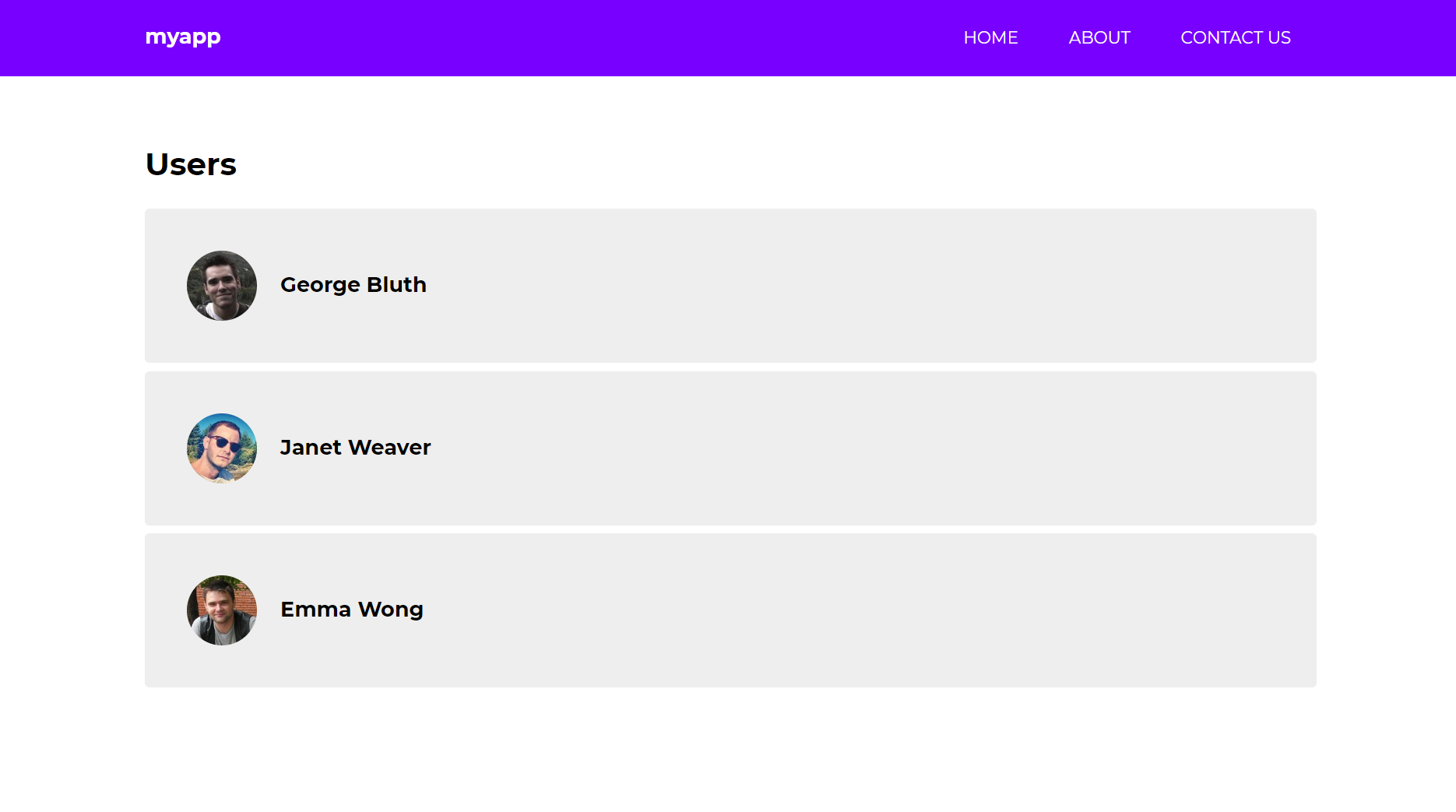 If you recall, we generated a component called contact. Let's create a contact form so that you can learn how to use forms in Angular 7.

To get started, we have to visit the app.module.ts file and import the Reactive Forms Module:

Next, visit the contact.component.ts file and specify the following

Then we're setting a few boolean properties that will help us determine when the form has been submitted and if it validation is successful.

Then we're creating an instance of the formBuilder in the constructor. We then use this form building to construct our form properties in the ngOnInit() lifecycle hook.

We have two properties, name and message.

Then we created an onSubmit() method that will be called when the user submits the form. This is typically where you would call upon a method in the service to communicate with a mail service of sorts.

Baked in here is a full form with validation. It also prints out the form values beneath it when the form has been submitted.

Let's update the css for the component to make it look decent:

Save it, and the result in the browser should look like this!

As you can see, Angular 7 is quite powerful but we've only just scratched the surface. If you're a beginner, I recommend trying to create a really simple project using what you've learned so far and then take it from there.