Ionic Native is a set of plugins that you can install within your Ionic project, that give you access to native functionality and more.

In Ionic 2, ionic-native is included by default when you use the Ionic CLI to generate a project.

In this tutorial, we're going to discover how to install and use Ionic native plugins.

First, if you prefer watching a video..

This written tutorial is also available via video, so you can watch and follow along if you wish.  Please subscribe to the coursetro youtube channel for more awesomeness!

Setting up a Test Project

If you wish to follow along, make sure you have a new project installed with the Ionic-CLI. If you're following along from the beginning of the free ionic course, you can skip this step.

In the console, type:

After it finishes the installation, cd into the firstProject folder.

How to Install an Ionic Native Plugin

Installing a native plugin is made easy with the Ionic-CLI. The format is as follows (don't type this):

When this command is finished running, it places the plugin in the /plugins folder inside of the project root.

How to use an Ionic Native Plugin

After a plugin has been installed, usage is fairly straight forward.

Select the intended component file that will use the plugin, and then we add the plugin as an import:

As you can see, you can add multiple Ionic Native plugins within a single import statement. These native plugins will always be added from ionic-native.

After a plugin has been imported, you're then free to use it in your component class. The documentation provides you with a Usage example, along with any associated methods and options associated with the plugin.

Let's give it a go

Visit the official Ionic Native documentation, this will provide you with a list of the available native plugins. Let's say for example that we wanted to display a user's current GPS coordinates. We would use the Geolocation plugin.

From the documentation, we can see that it shows us the command for installing it. So let's do that at the console in our project folder:

Next, let's head on over to our /src/pages/home.ts file and import it at the top:

Over at the Geolocation documentation: 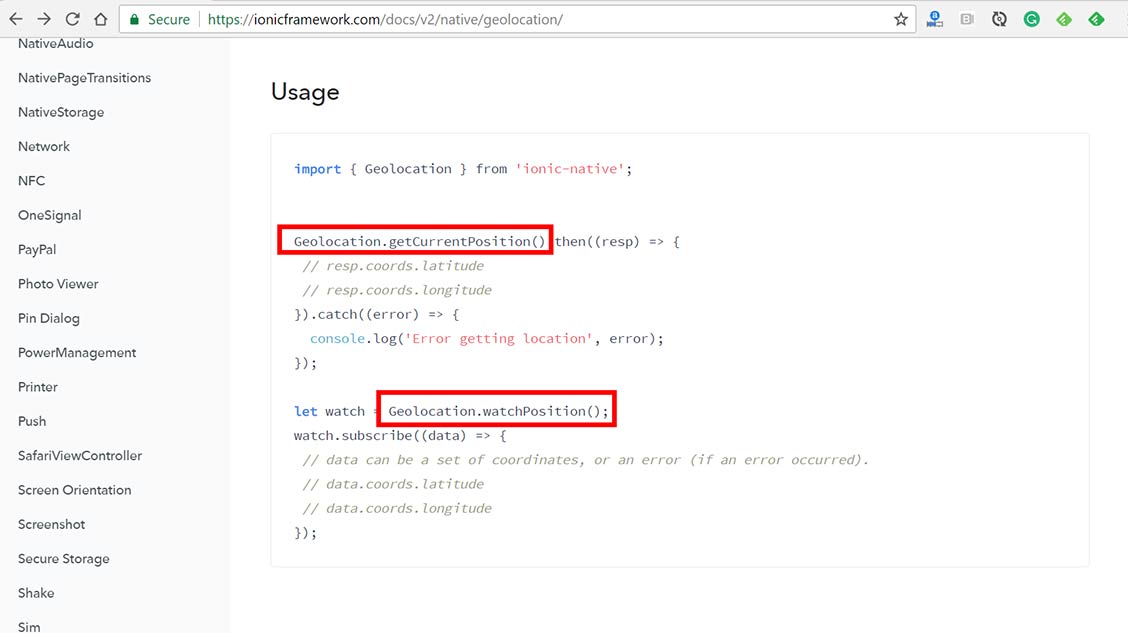 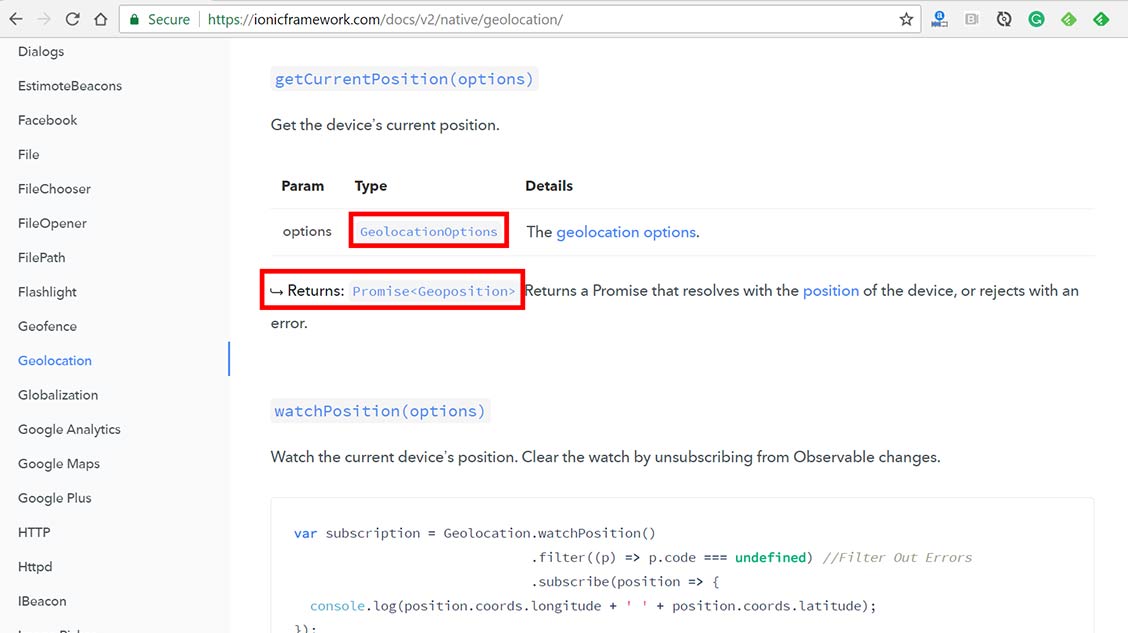 Here we can see that this method accepts options which is described as type GeolocationOptions. We can also see that it Returns a Promise <Geoposition>. Well, what do either of those even mean?

If you scroll down in the documentation further, you'll find sections for both GeolocationOptions and Geoposition 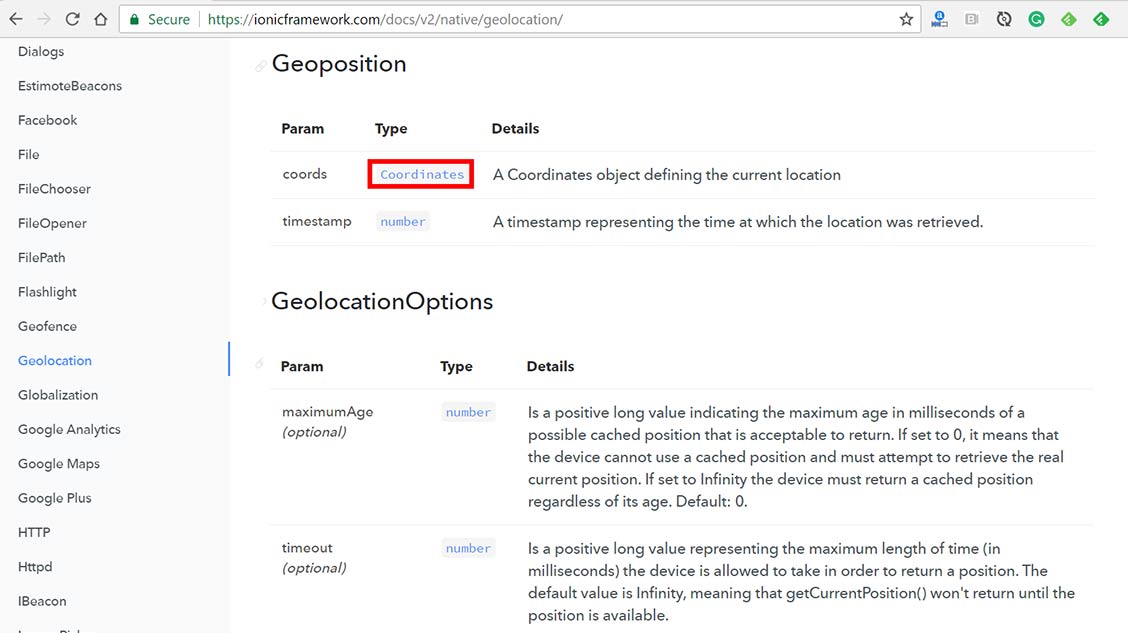 Notice that the GeolocationOptions are all optional, we don't have to pass any of these.

Also, notice that under Geoposition, a type of Coordinates. This is also defined in the documentation: 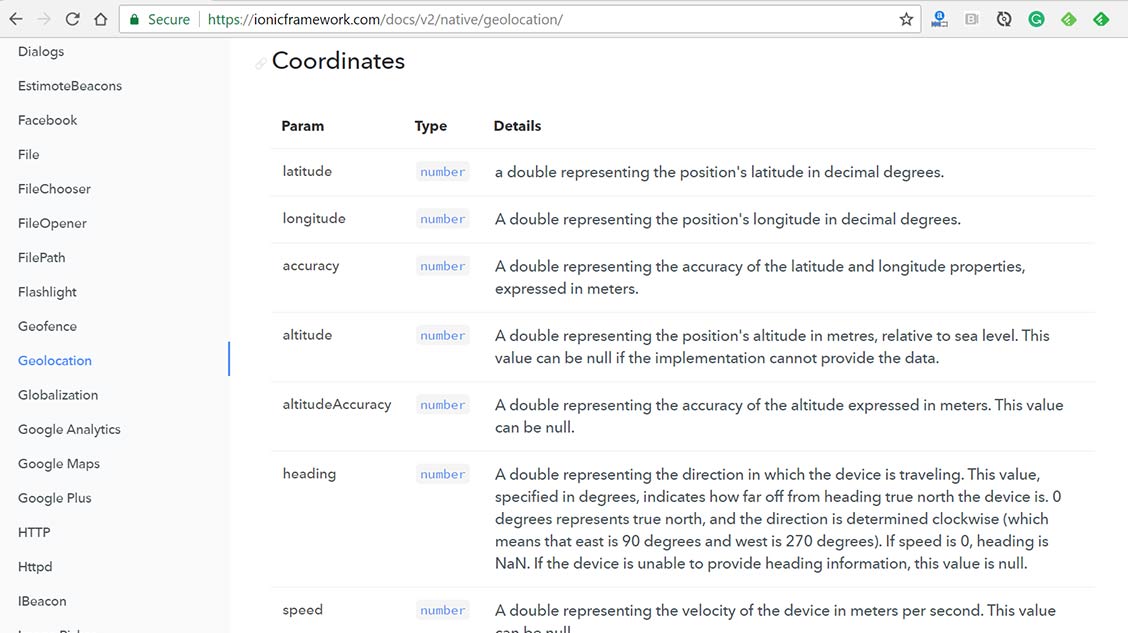 All of these parameters are returned to us through the coords parameter. This is how we can get a person's location, altitude, speed, etc..

In our home.ts file, add:

So, we're defining 3 properties coords, accuracy, and error. Then, we're creating a watch() method uses the getCurrentPosition() method of Geolocation.

If it's successful, we define coords and accuracy to the response. Per the documentation, we know that the response will contain a coords object with .latitude, .accuracy, and others.

In the home.html template, paste in this HTML:

In the console, type:

This gives us the following result: 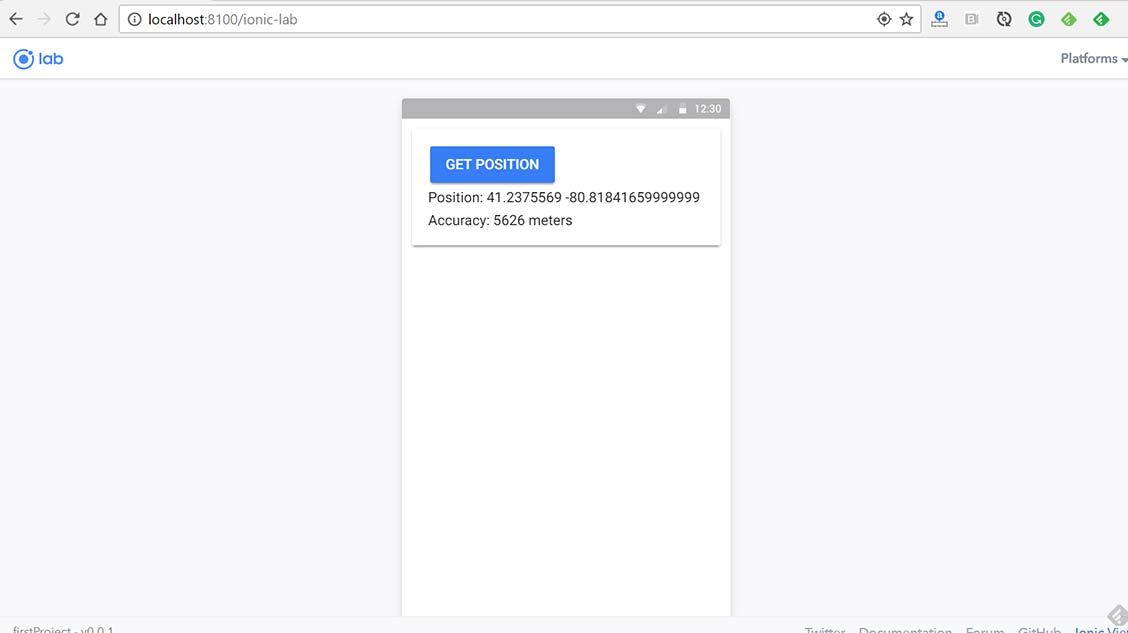 The accuracy is really off, likely because I'm on a desktop. If you want to preview it on your phone, you will need to use the ionic run device (device could either be android or ios).

On my android phone, the accuracy is 18 meters.

How to Remove an Ionic Native Plugin

You may find that during the course of development, that you may amass a bunch of unused plugins.

After removing any references to the plugin in your code, in the console type:

This will remove the plugin folder from /plugins as well as from any devices that have been added to the project.

As with Ionic components, Ionic native plugins are fairly straight forward to integrate as long as you understand how to interpret the documentation.

With all of the available Ionic native plugins, I'm sure by now you have a lot of different ideas for apps! Give it a go and let us know how it all turns out.

In the next lesson, we're going to take a look at how to deploy an Ionic 2 app.