The following tutorial is a part of our 100% free course: Developing Ethereum Smart Contracts for Beginners

In the previous lesson (video or written), you learned what a basic blockchain is, along with what smart contracts and decentralized apps are.

In this tutorial, you're going to begin learning the absolute basics of smart contract development. So, let's get started.

If you prefer watching a video instead..

Remix is a browser-based IDE built by the Ethereum development team. You can choose to either install it locally through the repository at the Github repo, or simply visit the online version at http://remix.ethereum.org. For this course, we're going to use the online version.

The purpose of the Remix IDE is to allow you to write and deploy Solidity smart contracts. It also provides you with useful debugging features. 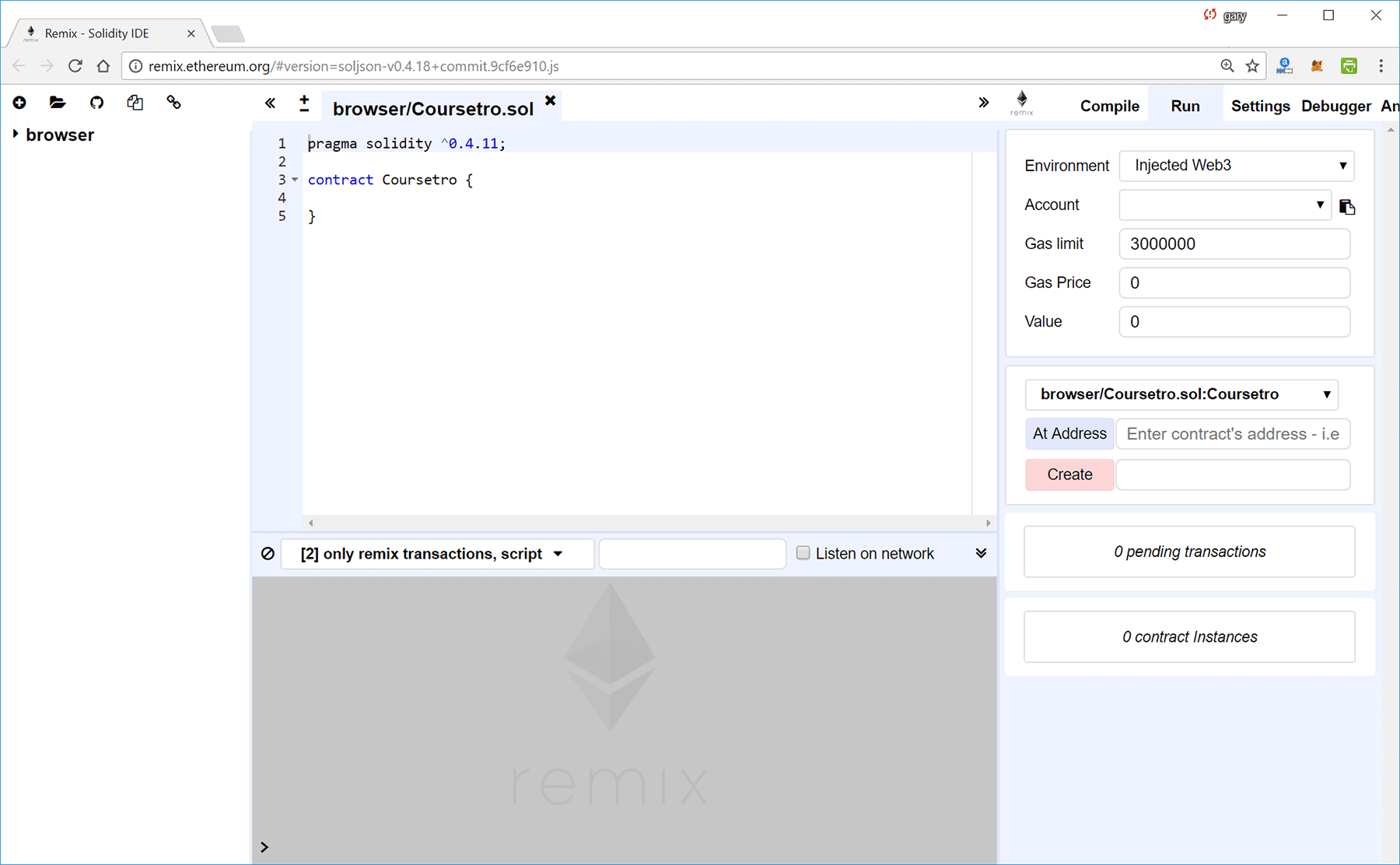 Visit the Remix IDE URL. You will see a similar interface.

The left column contains your Solidity files, which store your smart contracts in the .sol format. In the middle column top row resides the area in which you write your solidity code, and the bottom row contains your debugger.

The right column contains a series of tabs including Compile, Run, Settings, etc..

At this point, we only need to concern ourselves with the Run tab, where there's an "Environment" dropdown. By default, we want to leave it at the default setting of JavaScript VM, though we will be changing this later on in the course. The Javascript EVM (Ethereum Virtual Machine) means that you will run and deploy your smart contracts locally; they are not live. This is ideal when we're learning about the absolute basics, because it's very quick.

When you first visit the Remix IDE, it presents you with a sample smart contract. We don't want that, we're going to create our own from scratch.

Click on the (+) icon on the upper left portion of the editor to create a new smart contract. Call it "Coursetro.sol", or whatever you wish.

Start off by writing (or pasting) the following code:

The very first line defines the version of solidity you're going to use.

Next, you define the contract and its name and open it up like a JavaScript class.

On the right side of the browser under the Run tab, you will see a Create button. Click on this.

You will notice that underneath the Create button shows a new section with the name of the contract and "at 0x..." (memory): 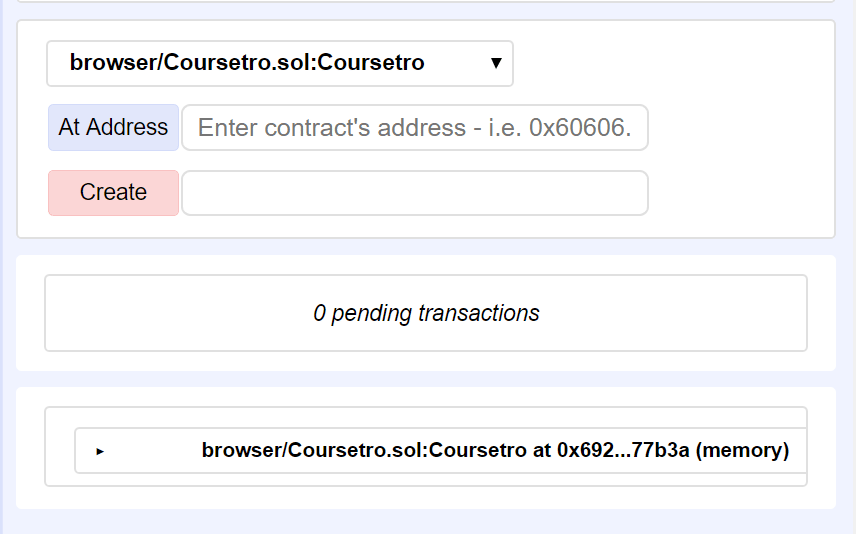 This means that the smart contract (yes, it's not very smart at this point) lives at an address. To see this full address along with other information, in the debugger if you click on the Details button, it will provide you with more information: 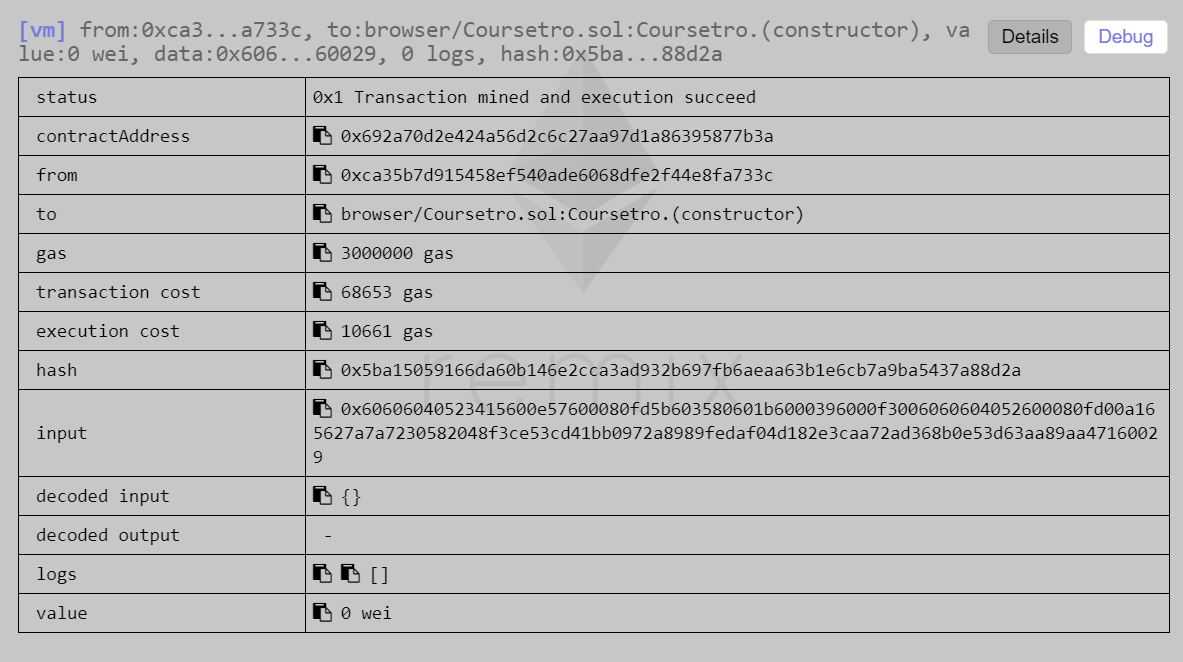 Notice there's a contractAddress, this is where the smart contract actually lives. No, it's not live on the Ethereum Blockchain because right now, we're simply working within the Javascript EVM.

Also notice gas. Every time a contract is deployed and modified, nodes on the Ethereum network must verify the contract. It's referred to as being redundantly parallel, as a way to reach consensus.

Gas is the name for the execution fee that senders of transactions (in our case, senders of a smart contract transaction) will pay for verification.

Elaborating on this further, from etherdocs.org:

"Gas is the name for the execution fee that senders of transactions need to pay for every operation made on an Ethereum blockchain. The name gas is inspired by the view that this fee acts as cryptofuel, driving the motion of smart contracts. Gas is purchased for ether from the miners that execute the code. Gas and ether are decoupled deliberately since units of gas align with computation units having a natural cost, while the price of ether generally fluctuates as a result of market forces. The two are mediated by a free market: the price of gas is actually decided by the miners, who can refuse to process a transaction with a lower gas price than their minimum limit. To get gas you simply need to add ether to your account. The Ethereum clients automatically purchase gas for your ether in the amount you specify as your maximum expenditure for the transaction."

Let's define a string variable in our contract:

In Solidity, you define a variable by first specifying its type.

What other types are there?

Let's also define my age. No one can have a negative age, so we will use an unsigned integer for this:

Hit Create to create the contract. At this point, if you look under details or try to drop down the contract on the right column, you will see nothing.

Where are our variables?

Solidity has four types of visibilities for both functions and variables:

Let's add the public visibility to our variables:

Click Create, we can now see on the right that we have 2 blue buttons with the name of our variables and the associated values.

When you define public state variables, the EVM creates getter functions for them. So, you can actually click on these buttons and it will return the value, as if it were a function.

Every smart contract has a constructor function. This constructor is called when a contract is created. Inside of it, you can define the values of variables.

Let's re-adjust our code to work with a constructor:

If you hit Create, you will see the result is the same.

Variables can be declared as being constant. As the name suggests, these are variables with a constant value that does not change.

Let's transform the fName variable to a constant variable:

In your IDE, you'll notice a red "X" next to line 9. If you hover over it, you will notice that it says, "TypeError: cannot assign to a constant variable"

Remove line 9 and the error goes away.

Our smart contract at this point is pretty boring. Let's integrate a potential user interaction where we can manually define a Coursetro Instructor's name and age.

As you can see, we got rid of the constructor for now.

setInstructor accepts 2 parameters, _fName and _age. Once called, we set our string fName to the returned _fName, and same with age.

Then, our getInstructor() function is defined as being constant, and it returns a string and a uint.

This is where we return the fName and age variable once it's called.

Next, click on the getInstructor() button and you will notice it now returns the inputed value! This is how you set variables from user input in a smart contract.

Hopefully you're staring to understand how things work in a basic sense with smart contracts.

In the next video, we're going to step outside of Solidity for awhile, and actually connect our smart contract with a web-based user interface where we will be able to call our 2 functions: setInstructor() and getInstructor()!

This tutorial is a part of our 100% free course: Developing Ethereum Smart Contracts for Beginners