Being that Coursetro is all about full stack development, I would be remiss not to include content that included UI (User Interface) animations.

There are a variety of purposes for creating these types of UI animations, from promotional videos for a website or service, to impressing clients with a video portfolio of your work.

Whatever the case, Adobe After Effects is an excellent choice for creating these UI animations.

In this tutorial -- provided in both written and video form below -- we're going to create a simple UI from scratch in After Effects, and then animate it.

Watch the video below to see a preview!

Starting the Project in After Effects

Create a new project with the following settings: 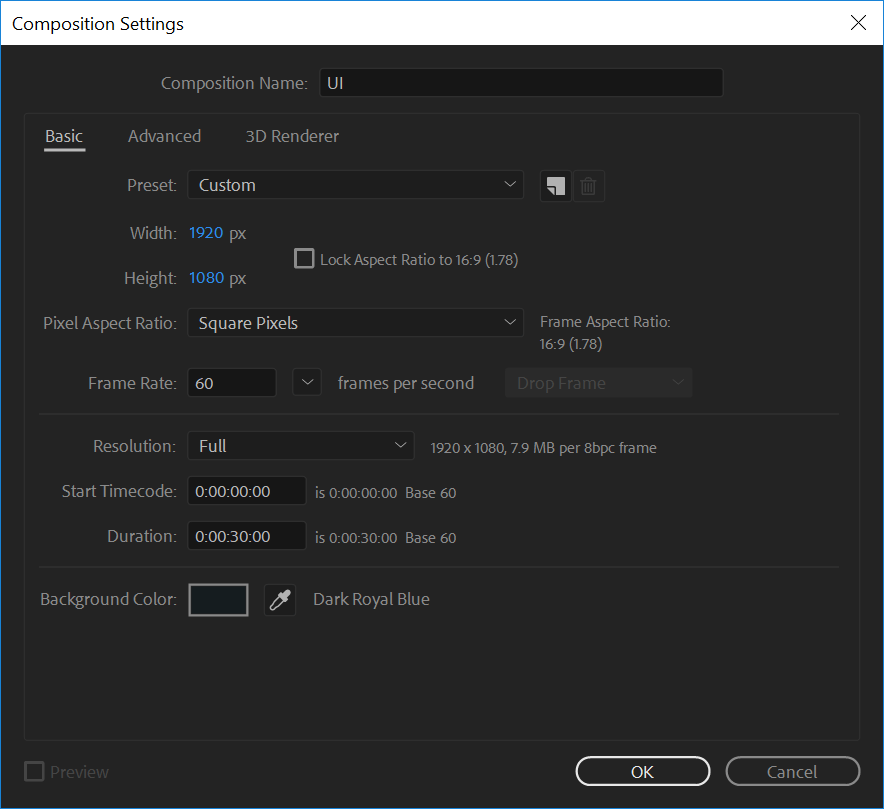 Next, we're going to design the UI from scratch here in AE. You could choose to do it this way, or you could import assets of the UI that you created in a different app. If you can, it's best to stick with doing everything in AE.

Go to file Layer > New > Solid and make the color #F2F2F2 which is a light gray. This will be a background for us, and you can then lock the layer in the timeline so you don't select it by accident while working.

Next, choose the rounded rectangle tool in the toolbar up top, and left click and drag out on the canvas to create a similar shape as shown (Also, make it white with no border): 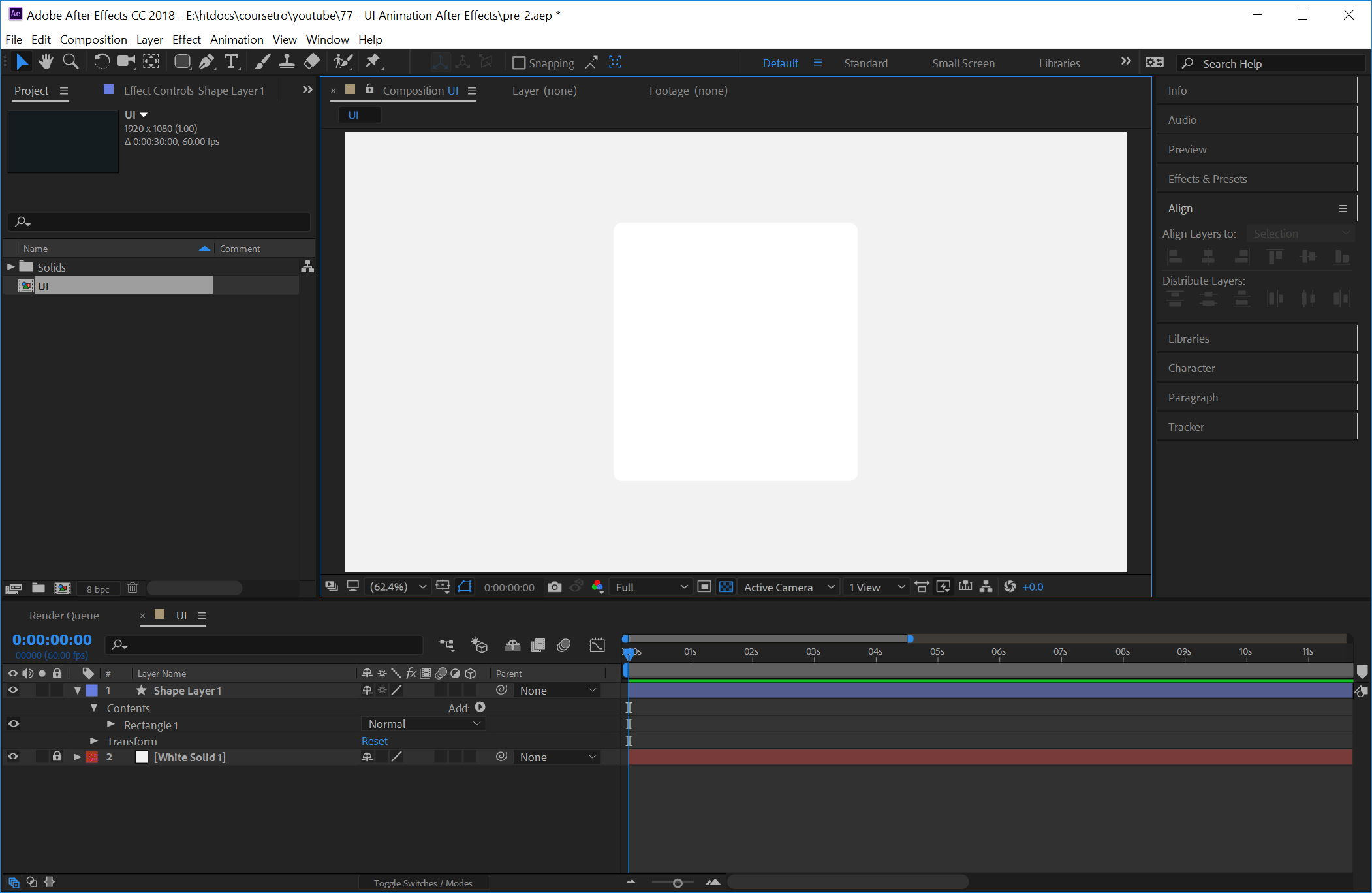 Next, use the type tool to create a USERS label, and then IconFinder to download 2 icons to situate to the right side of the panel (download PNG's, import them into AE, and drag them onto the canvas. Make them around the same size as below, and change their opacity to 50% by hitting T while selecting the layer). 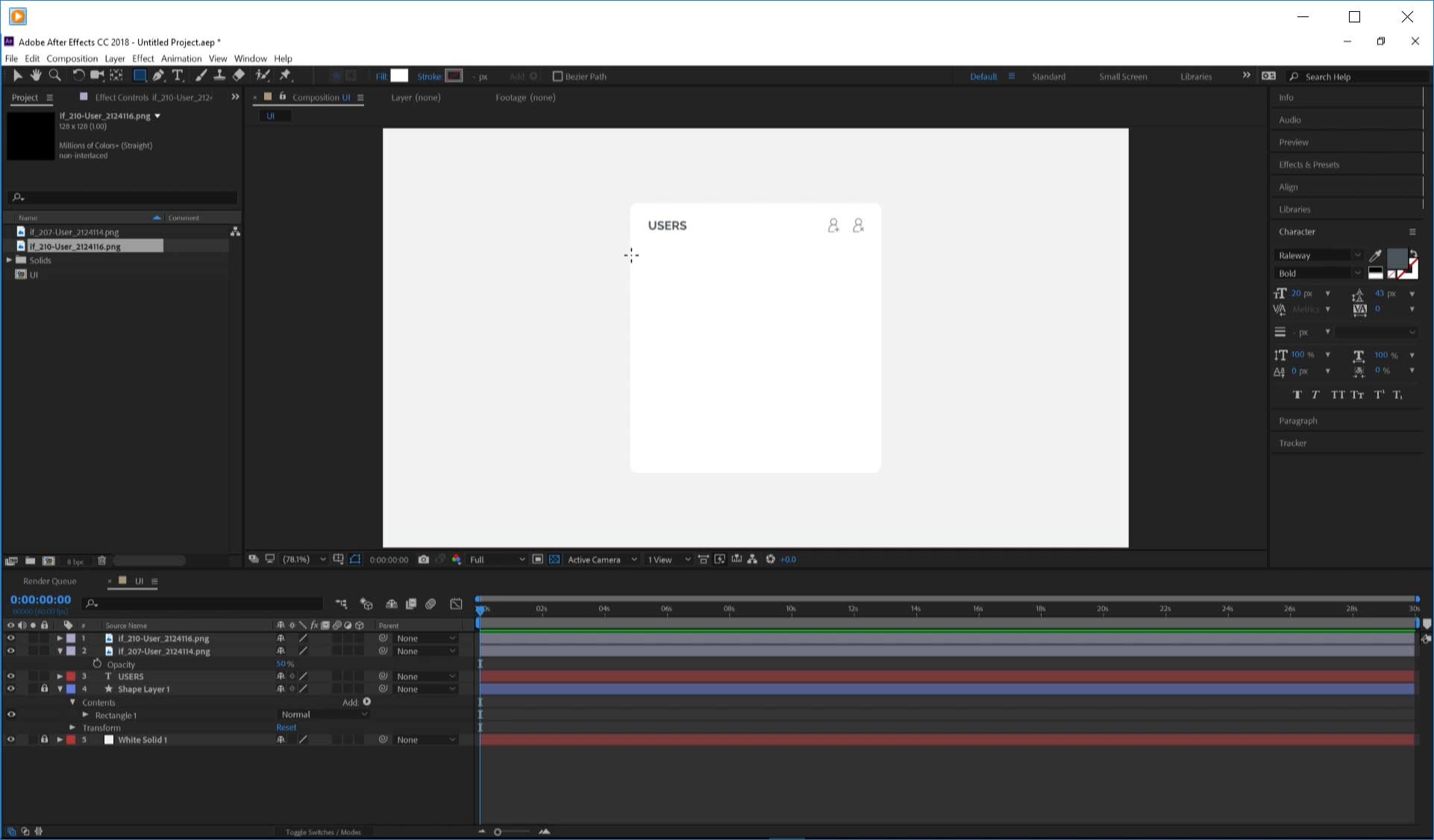 Next, create the following layers: 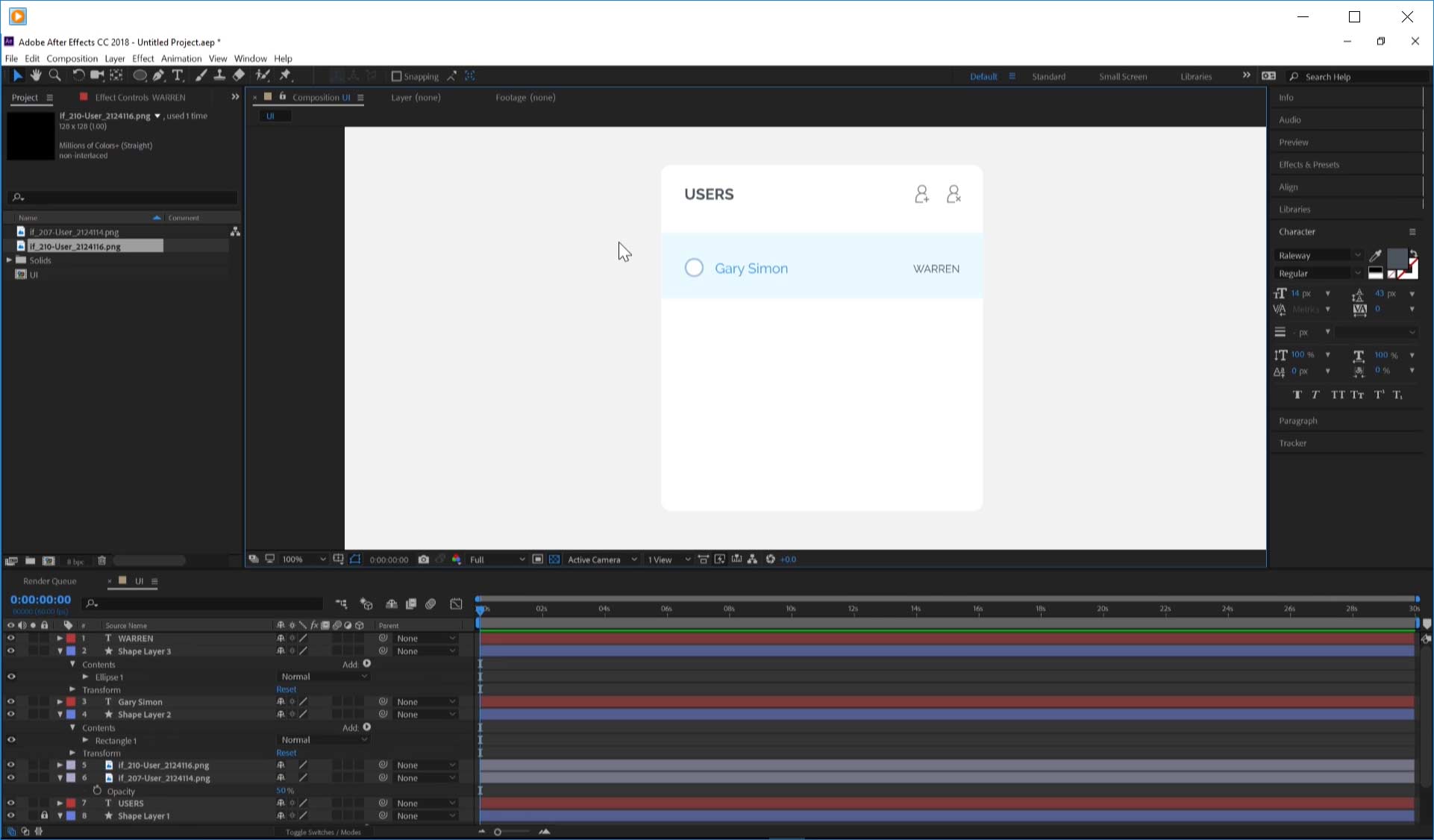 Then, select all 4 of the new layers, hit CTRL-D to duplicate, move the layers up in the timeline so that all 4 are on top, and then while holding SHIFT, move the new duplicates down beneath the first user panel. Do this one more time to create something similar to the below screenshot: 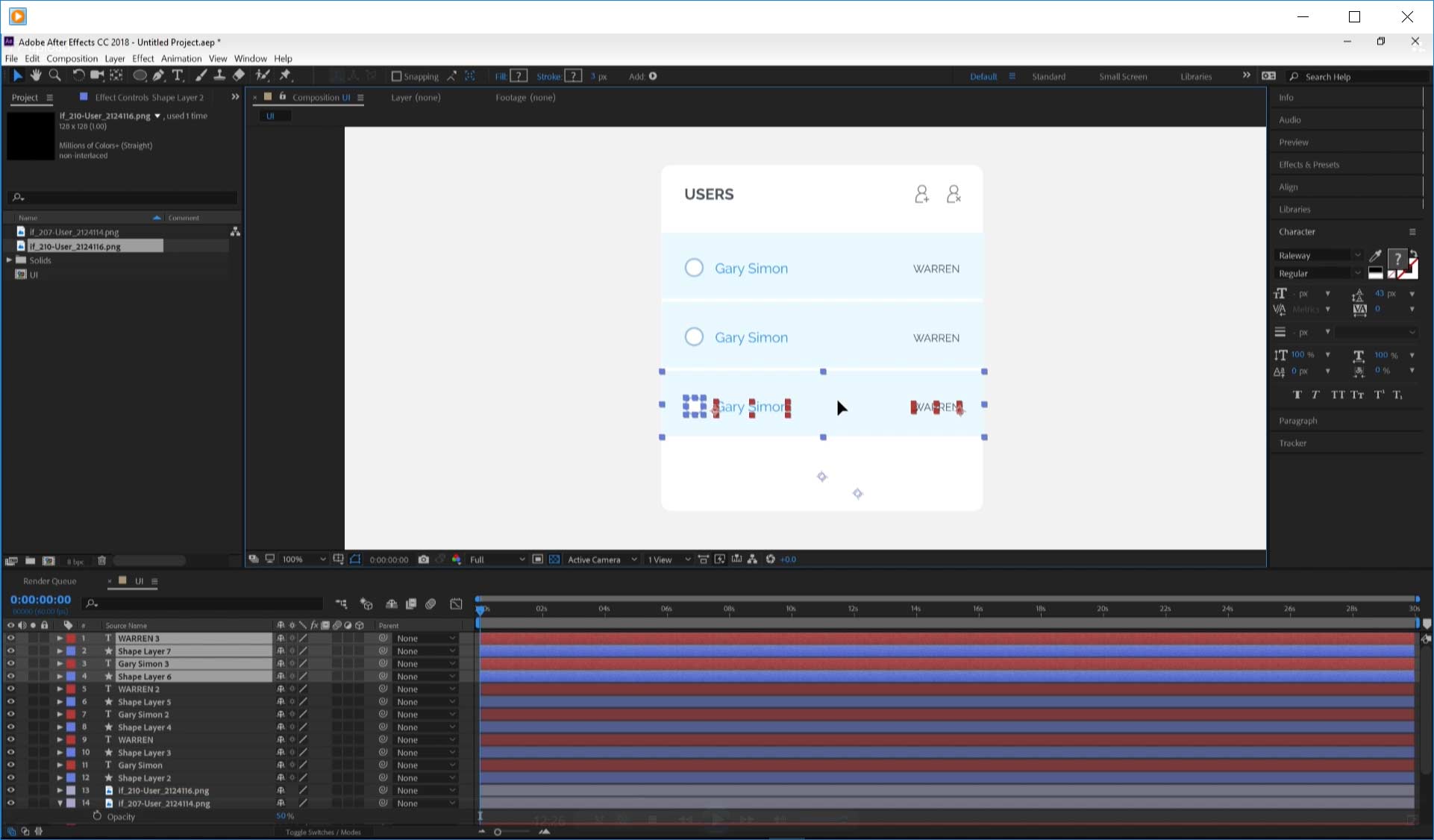 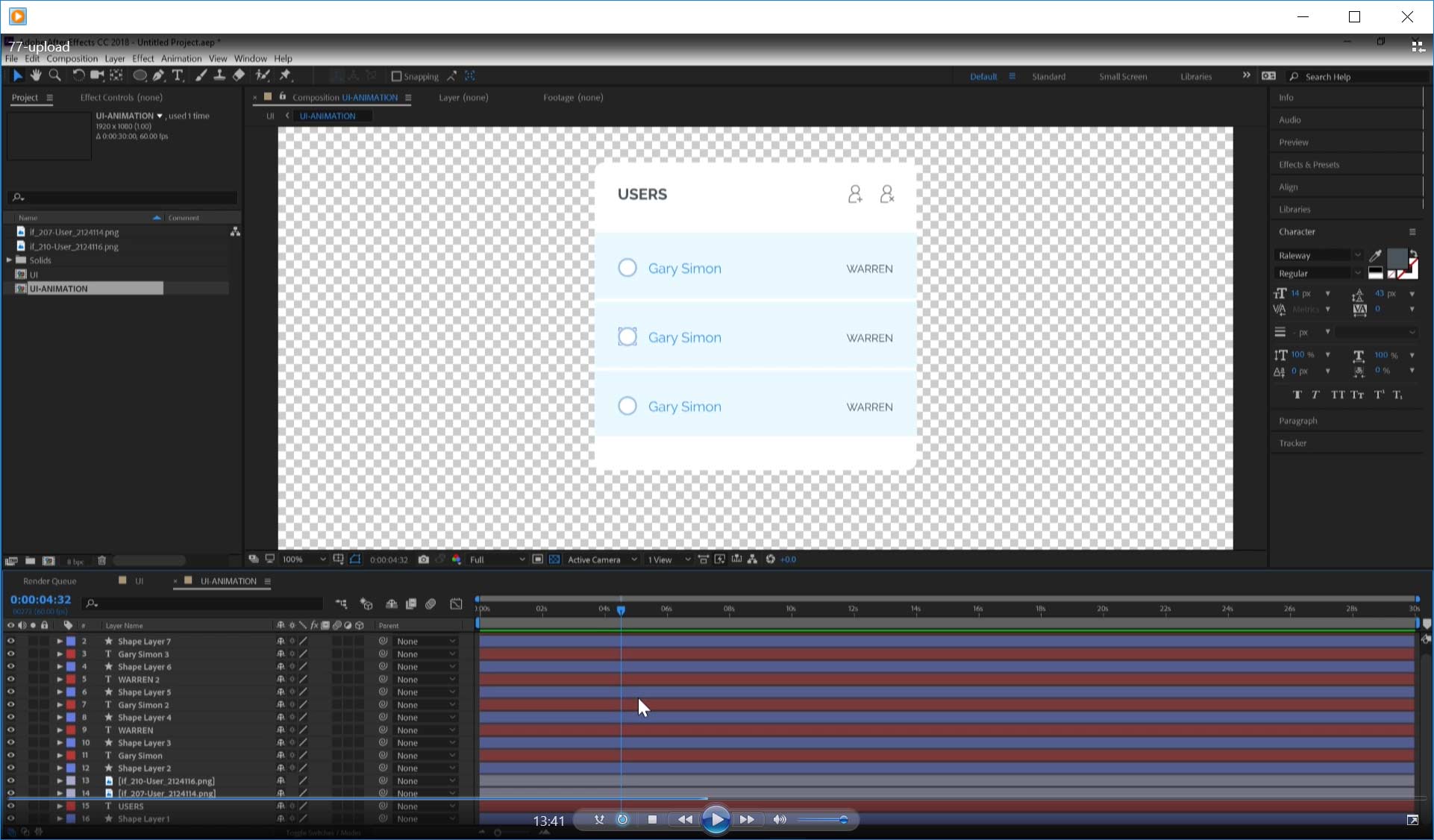 Next, double click on the new precomp and move all of the layers with exception to the white panel layer to the right on the timeline so they're out of the way. 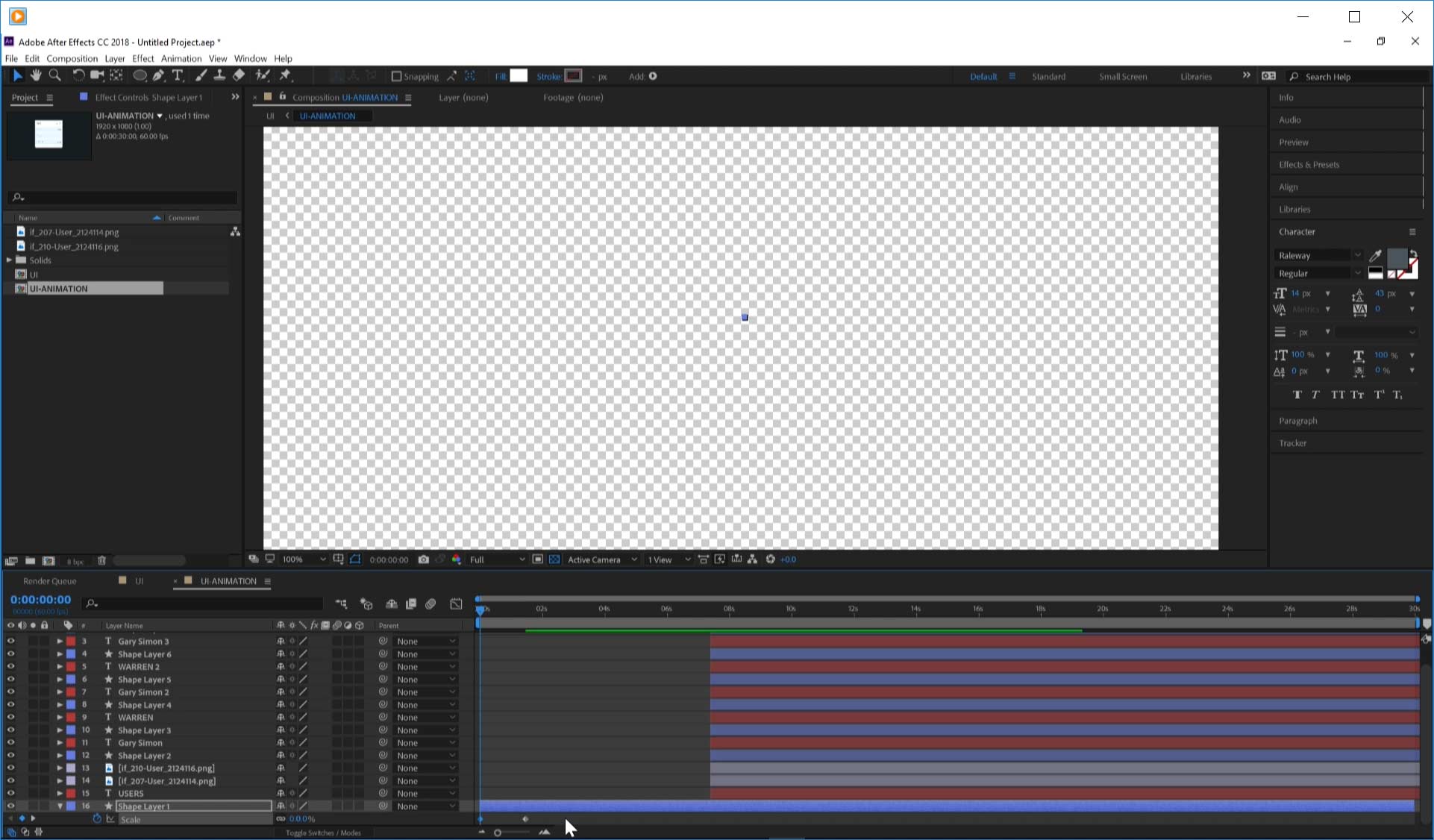 At this point, select the USERS type layer and the two icon layers. Move them near the end of the white panel animation in the timeline. With all 3 selected, hit P for position, and then hold SHIFT and hit T for opacity.

Create a keyframe at the beginning where the position of these 3 elements is vertically lower (hold shift to move them down) and the opacity is 0%.

Move forward as shown below and create a new keyframe where they're at the original position and 100% opacity: 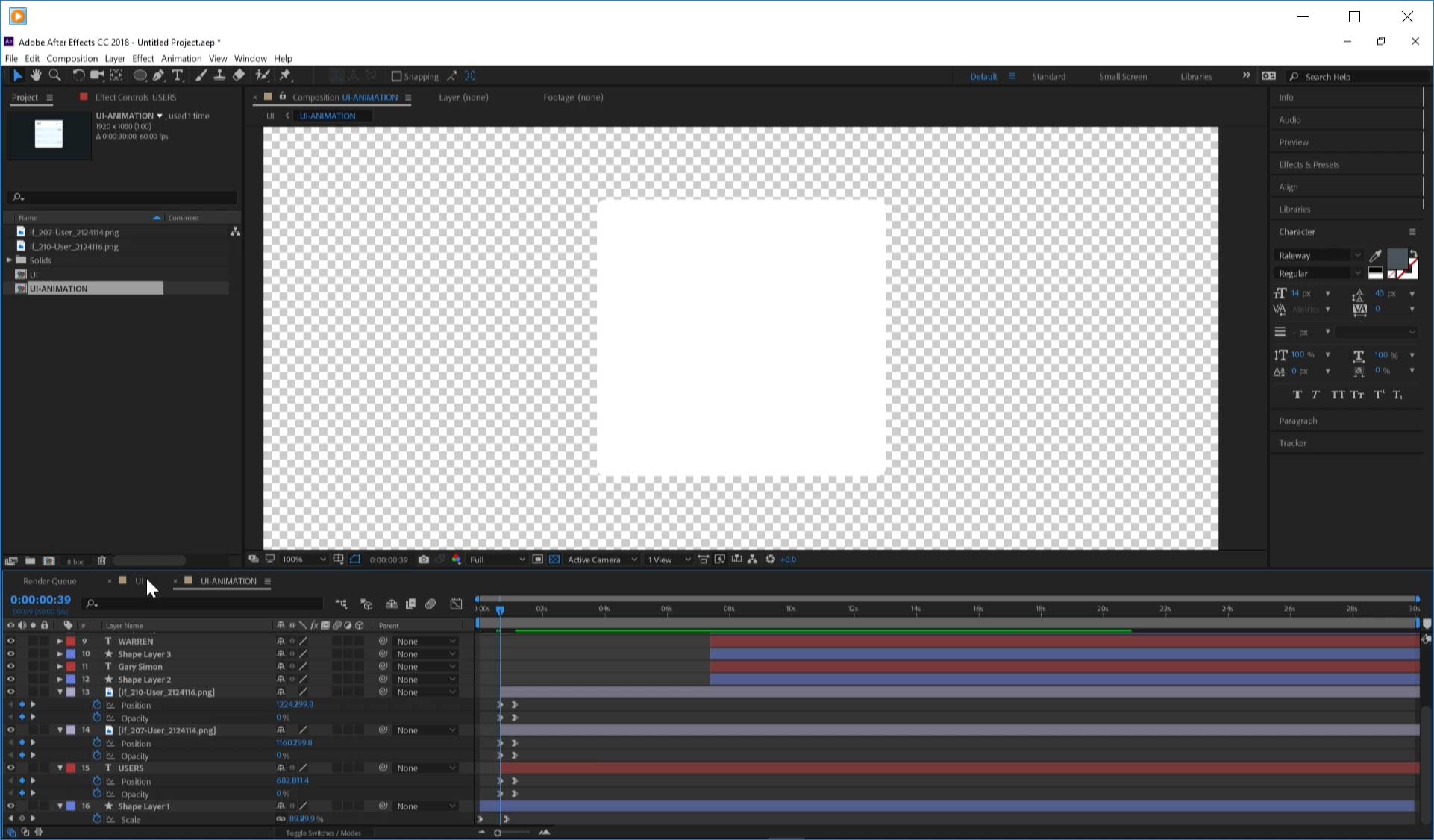 Next, move all of the layers shown below to the beginning frame of the precomposition: 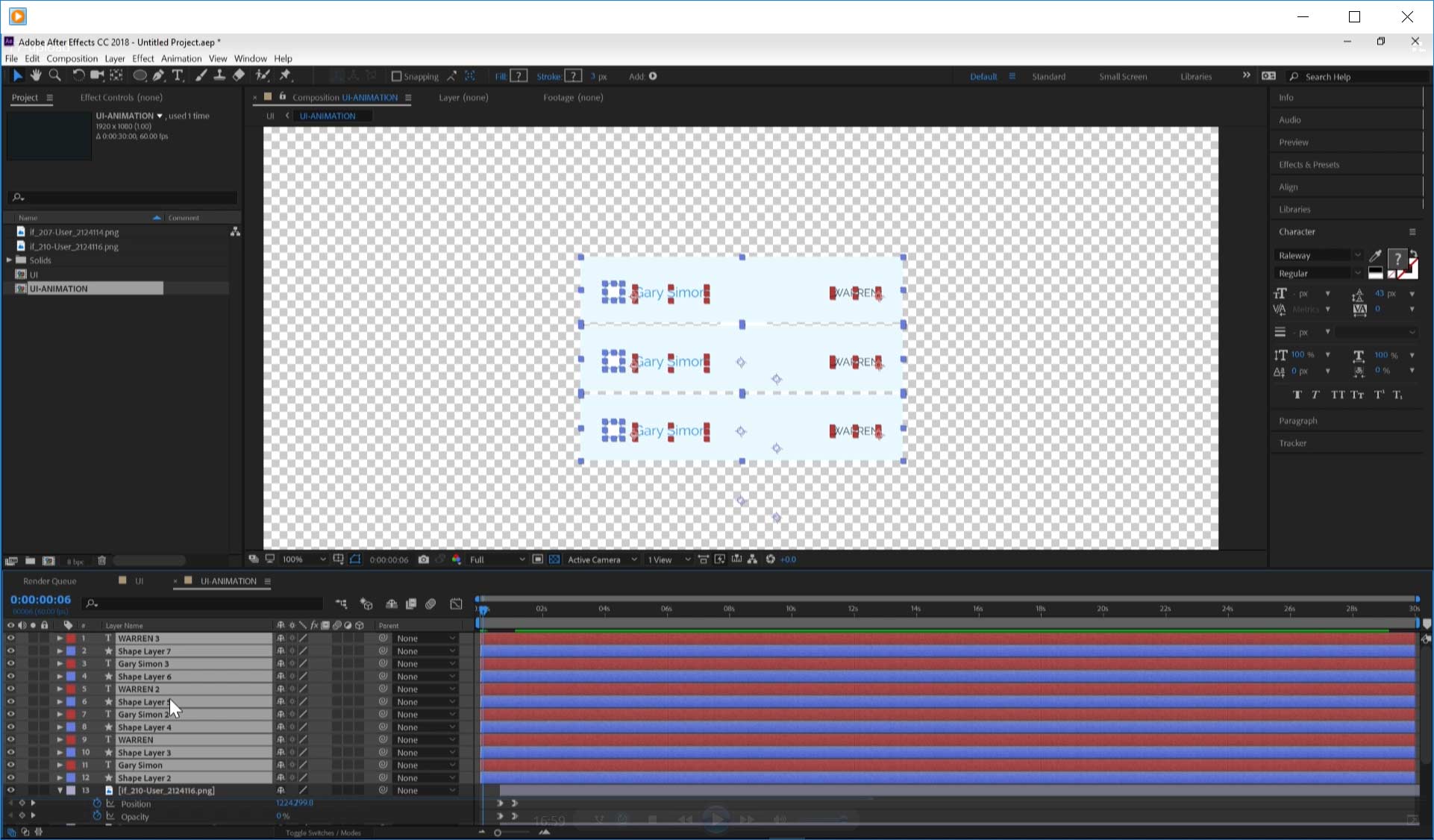 Select the first 4 layers that create the user information and go to Layer -> Pre-compose. Do this for the remaining panels so that you have 3 new pre-composed layers in the timeline, and then situate them as shown below: 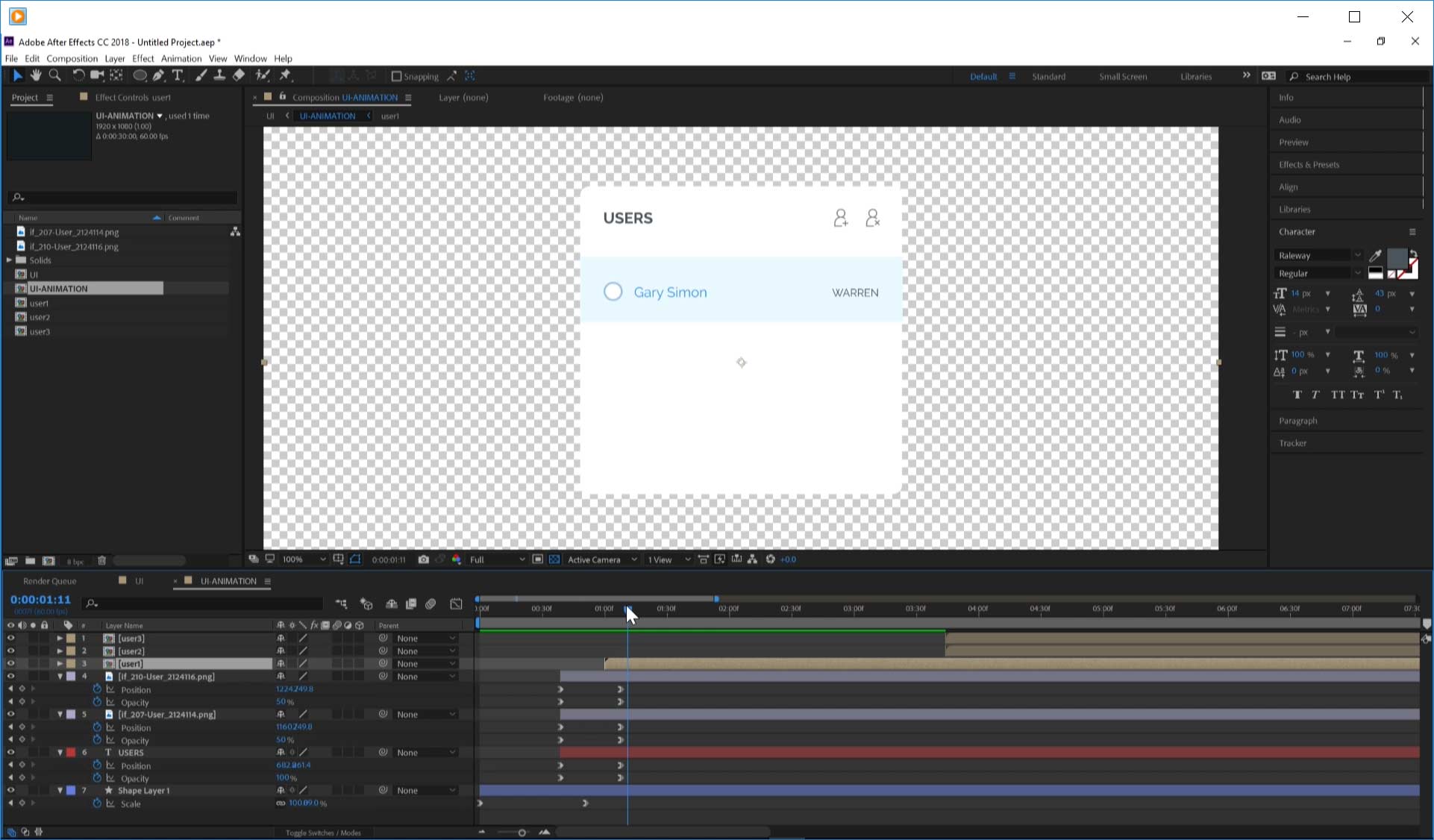 Take the first precomposition and situate it in the timeline as shown below, and create a similar set of keyframed animations as the USERS label and icons: 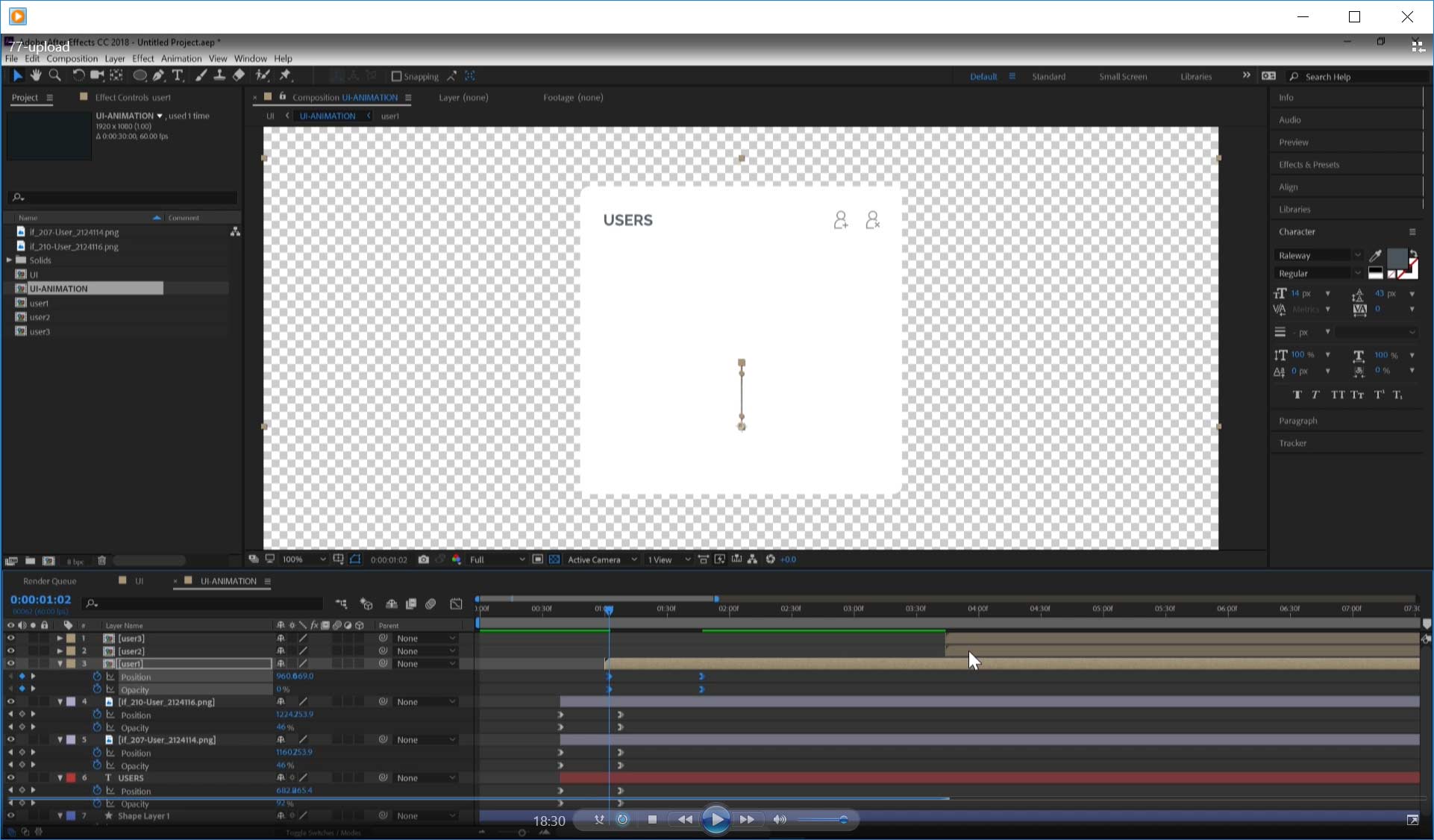 Copy the 4 new keyframes and then paste them at the beginning of the remaining 2 precompositions and organize them as shown below: 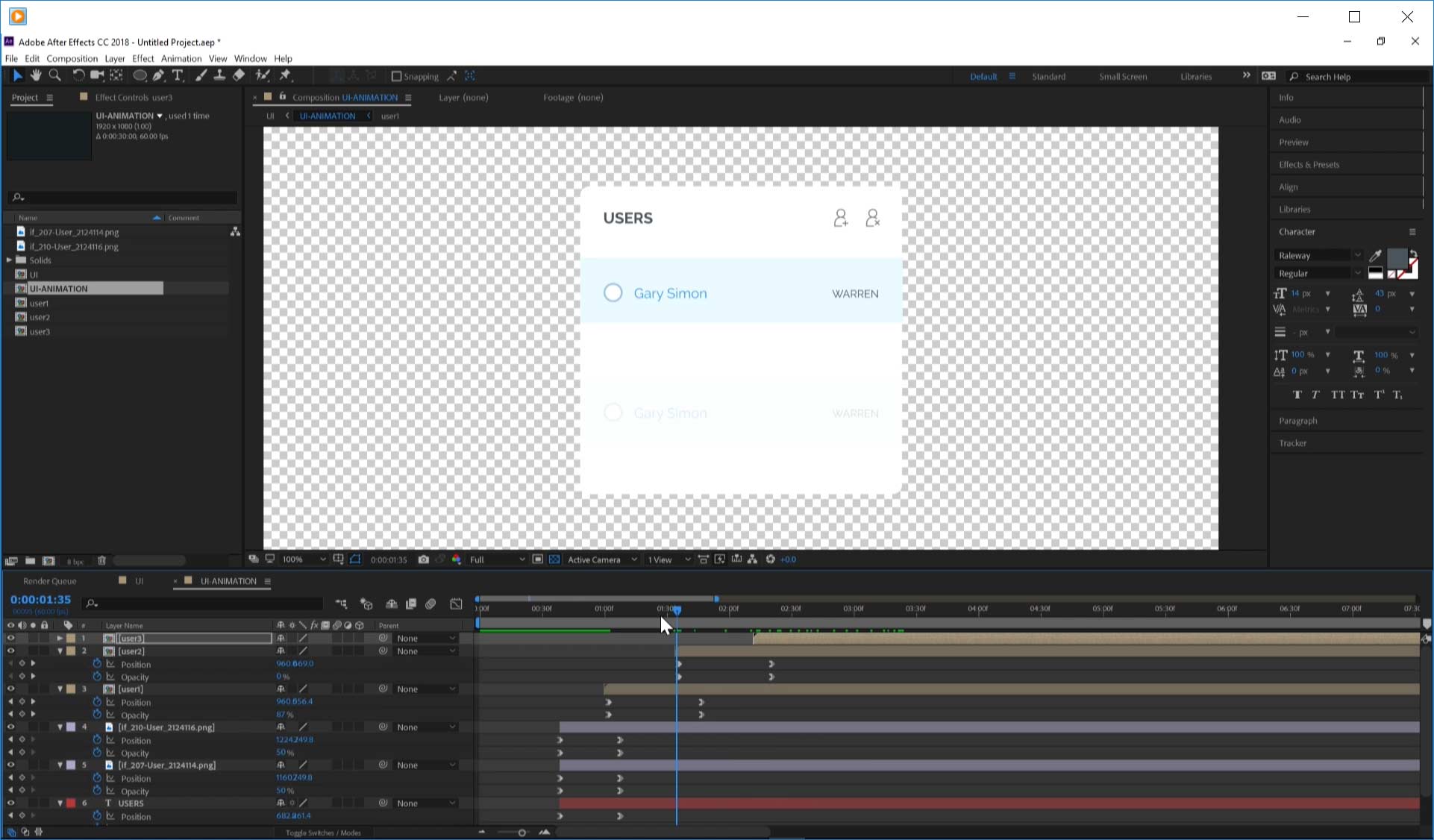 At this point, you can go back to the primary composition and hit the 0 key on the number pad. This will show you the result to this point.

In the video that's embeded above, I show you how to take this project 1 step further by emulating a click event on one of the user containers.

Watch that video to take that step further.

Hopefully, you learned a lot throughout this tutorial on Animating UI's in After Effects CC 2018!