How to Design a Cryptocurrency Logo

While I'm going to show you the process behind designing a logo for a cryptocurrency business, the process of effective logo design remains the same regardless of the niche.

Whether it's a cryptocurrency business, a flower business, or a gaming business, the following approach is one that you can use while designing a logo for literally any business or purpose.

We're going to talk about what constitutes effective logo design, while showcasing a single project that I recently tackled for a cryptocurrency related business.

We have some pretty awesome courses

If you prefer watching a video tutorial

What is the business?

I'm into cryptocurrencies like Bitcoin and IOTA. I came across an individual who's launching a decentralized charity called "ForT" based on IOTA, which is a cryptocurrency.

ForT as a name, is a play on "For Them", and "FORT" is being used to signify a shelter for the disadvantaged.

A description of ForT as a charity/service is, "ForT is a decentralised charity that employs the IOTA tangle to provide economic aid to people in need. ForT provides a new way of looking at charities, we cut loose the middleman — the charity itself. Thus creating a decentralised payment method in which only the people for whom the money was intended can spend the money."

I was approached to design a logo for "ForT", and I took it as an opportunity to do what I love.

For the ForT project, I identified several attributes:

Given these attributes, we can begin to form concepts that relate to the wordmark (the type portion of the logo) and any symbolism.

So, where do we begin? I like starting with the name, or the wordmark.

Again, a wordmark is the type portion of a logo. In our case, it's ForT, FORT, or fort. If we want a unique treatment applied to the type outside of using a strict font without any modifications, it's best to ensure that whatever is done, is unique and relevant based on the business.

So let's take a look at ForT in a regular sans-serif font: 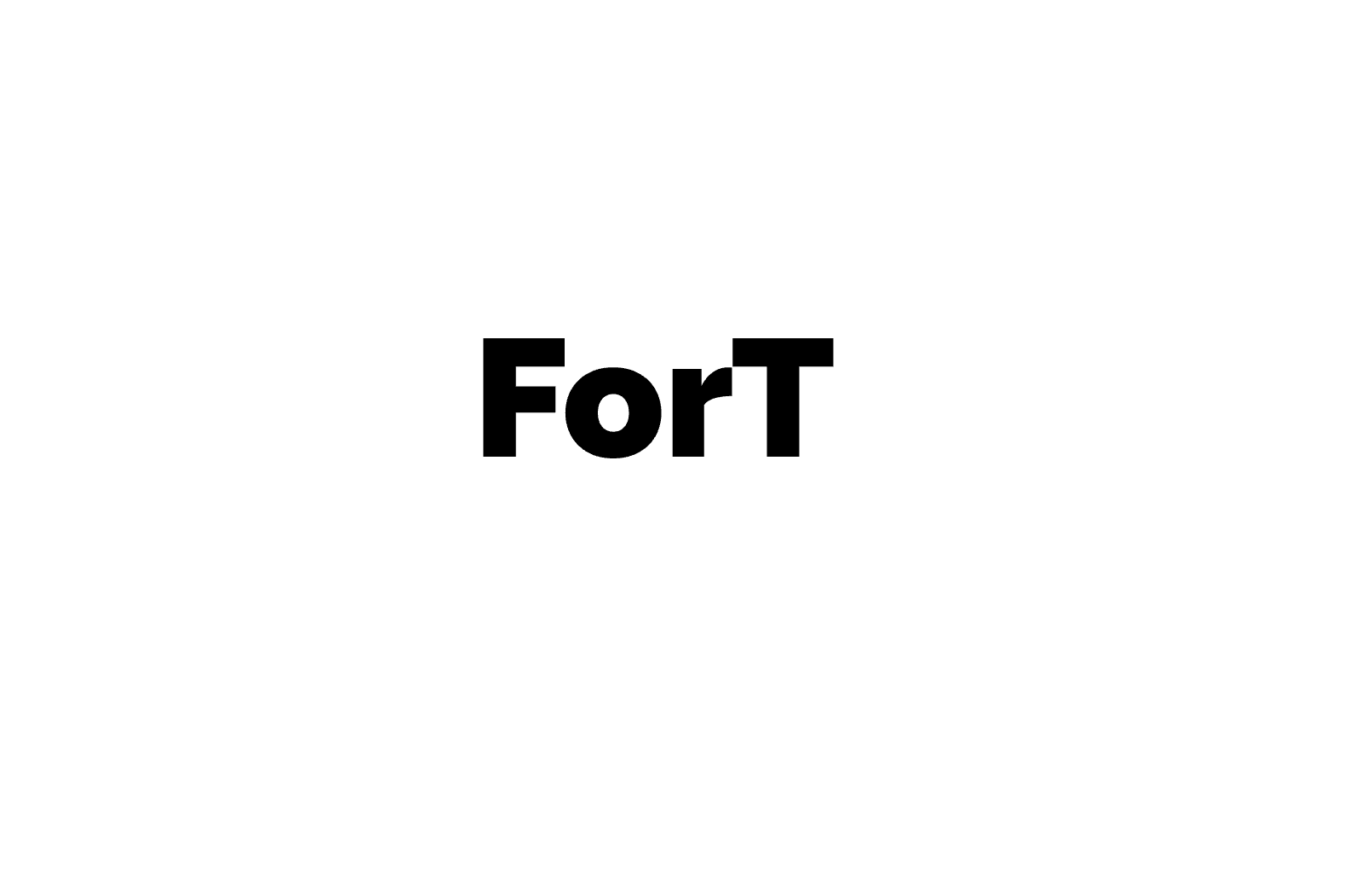 Looking at the individual letterforms can help us formulate visual representations of the attributes that we formulated earlier.

The one that I came up with immediately was to connect the top of the "F" with the top of the "T", which would provide for an enclosure or a fort, over the entirety of the wordmark. 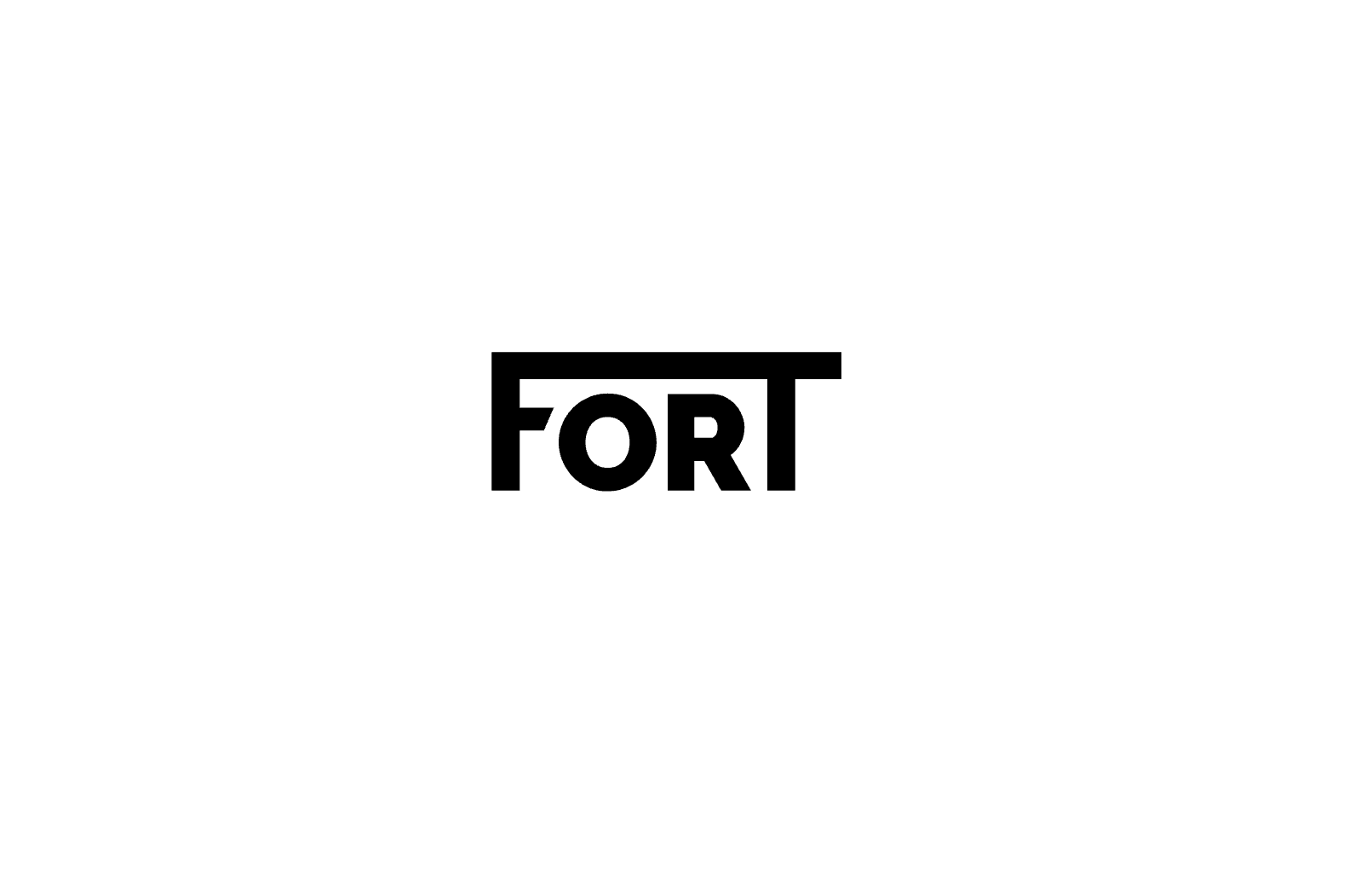 A few things changed here. I decided to capitalize the O and the R to help create visual consistency. The lower case lettering throws an extra element of complexity that I didn't want.

I liked this concept because it's simple, relevant and unique; all of which are necessary attributes to an effective logo. But we can't just stop there, it's always worth further exploring a given concept to see if we can take it other places.

Next, I came up with this concept by expanding on the former: 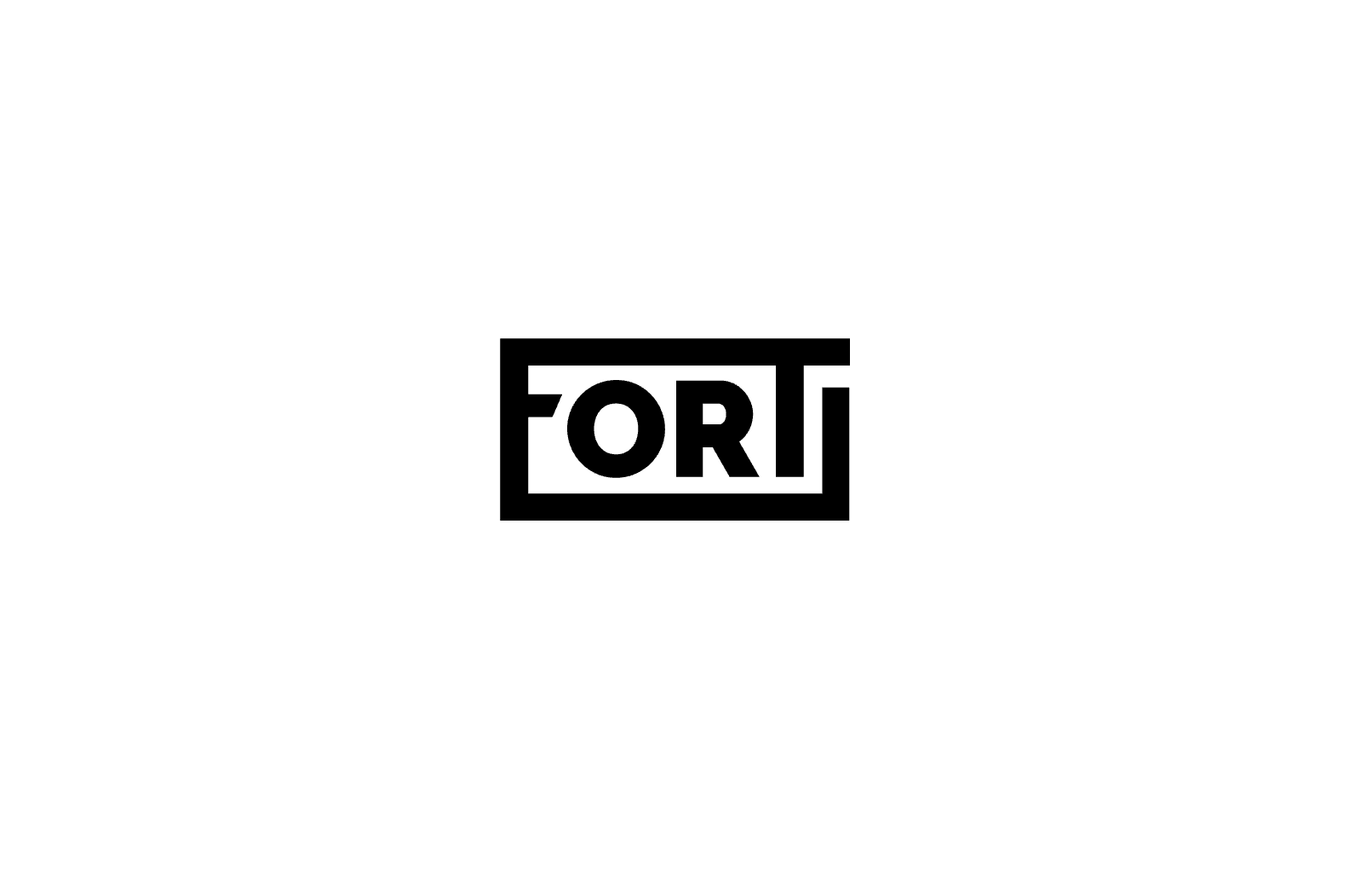 This is an approach that further solidifies the concept of being in a fort or an enclosure by encasing the entire wordmark in a rectangle, with a single point of entry under the T.

I took this concept a few steps further: 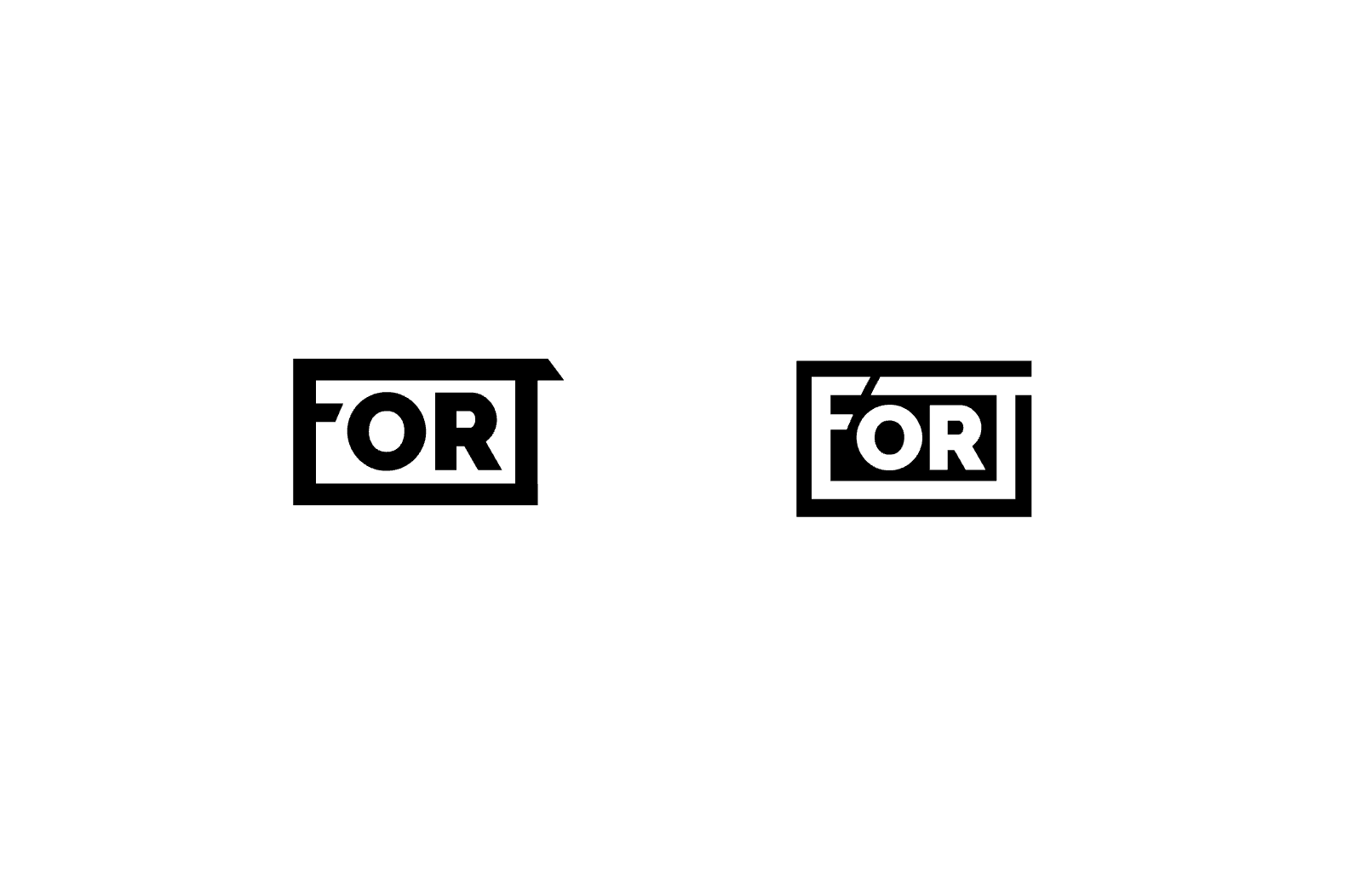 The concept on the left creates an entire enclosing, though I thought it might be hard to read so I created a variation on the right that separates the "F" at the top.

At this point, I showed the client this series of concepts. Their feedback suggested they wanted to see a separate symbol, like the Nike Swoosh.

Combination logos consist of a wordmark and a separate symbol that can be used together and independently. For this cryptocurrency logo, they wanted to see a unique mark that they can use outside of the name.

Symbolism can come in many forms. Some are purely abstract, others are literal, and some are lettermarks. A lettermark, like a wordmark, uses a letter as the foundation of the symbolism. It's usually either just a single letter that represents the beginning letter of the business name, or multiple letters in the case of a business name that has multiple words.

In the case of ForT, we have "F". The task is to represent the "F" while also representing, in a unique and relevant manner, the purpose of this cryptocurrency business.

The process is the same as above in the case of the wordmark. Here, we have a simple "F": 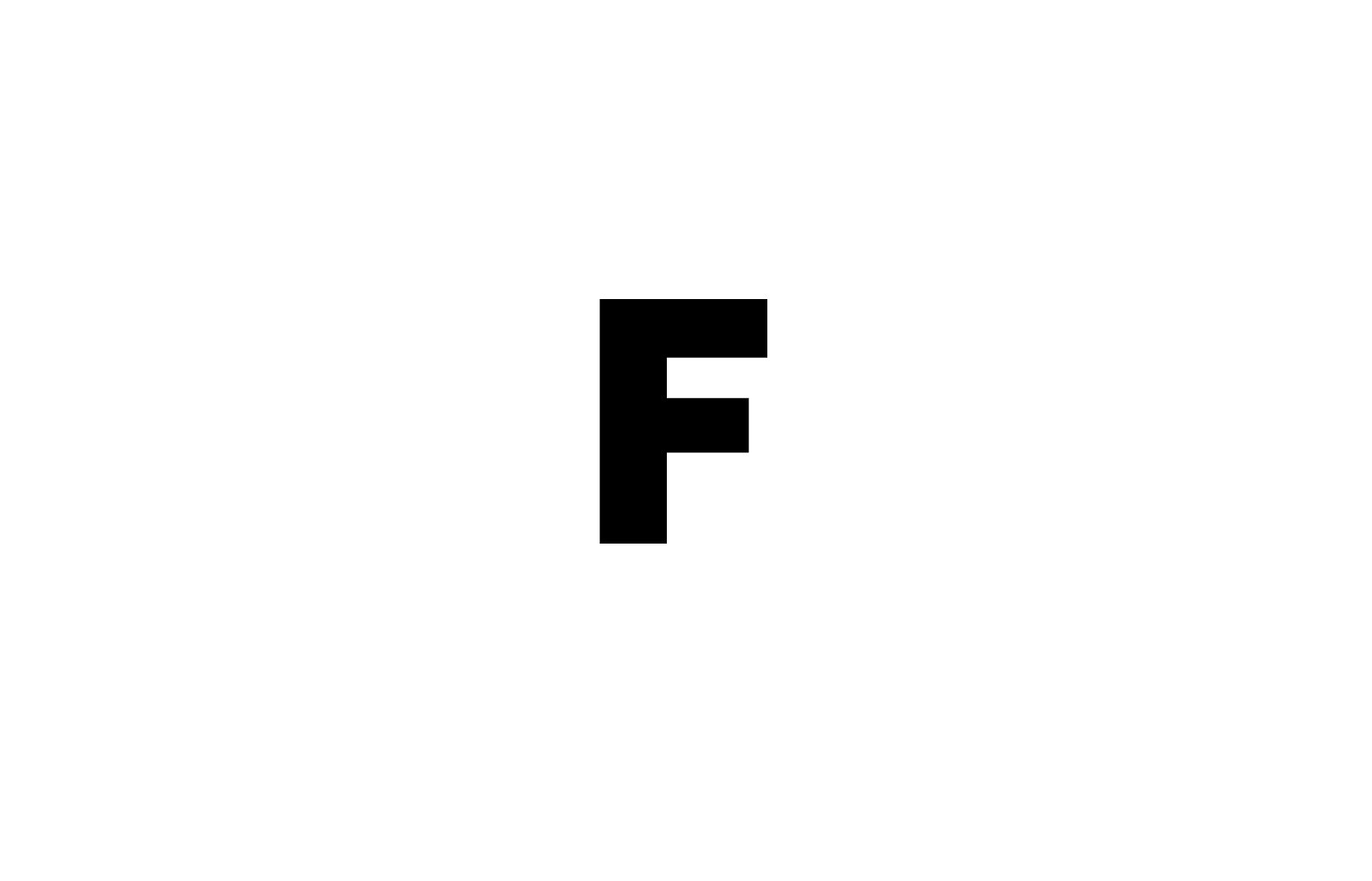 It's all about identifying unique forms that can pertain to this business, while maintaining the readability of the "F".

My idea was to recreate the "F" form by using a perfect square: 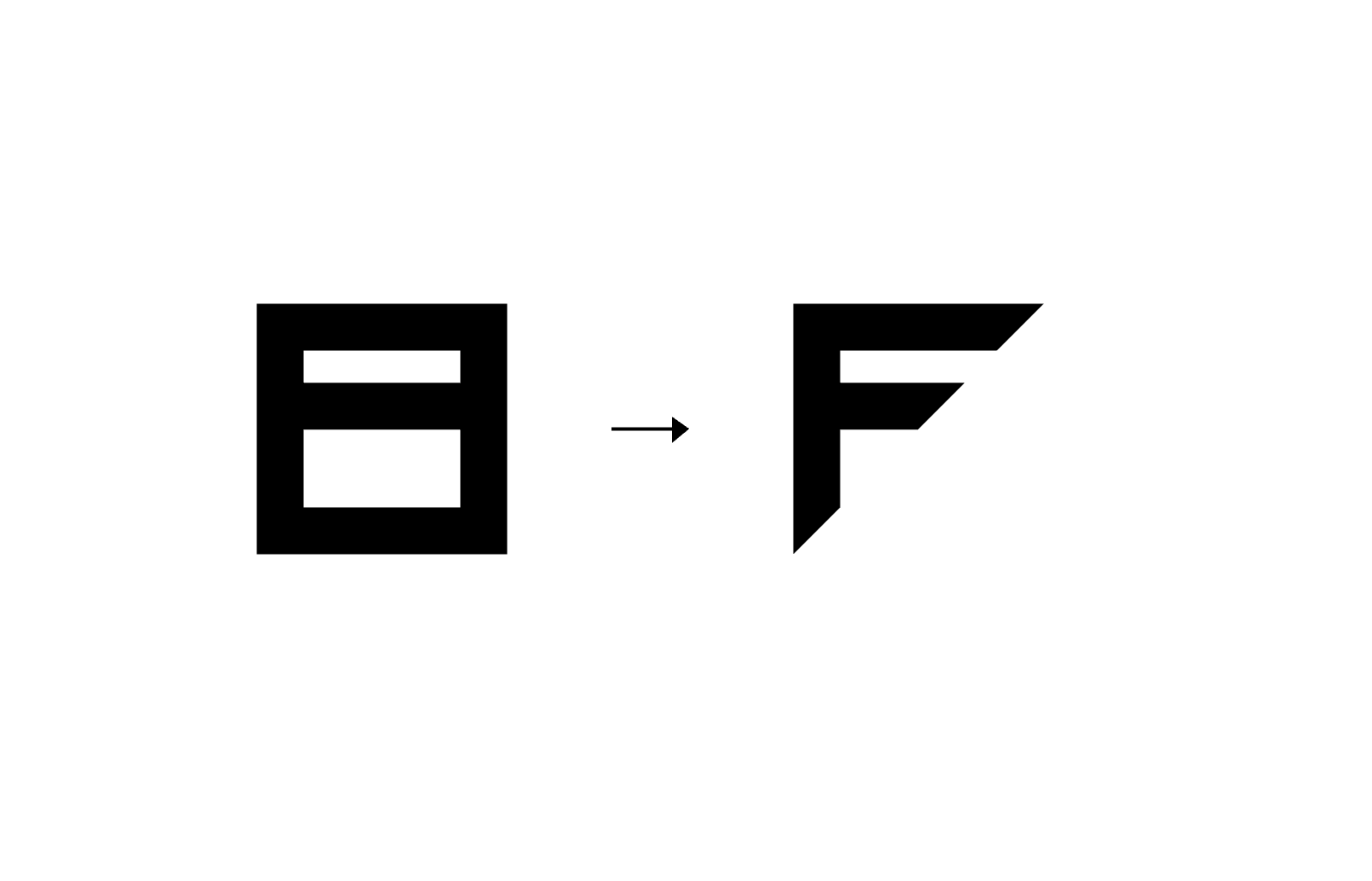 Now, we have something unique but still has an identifiable "F" form. Still, there's nothing that says anything about this company.

I decided to stick with the enclosure/fort concept by completing the square in a less thick weight: 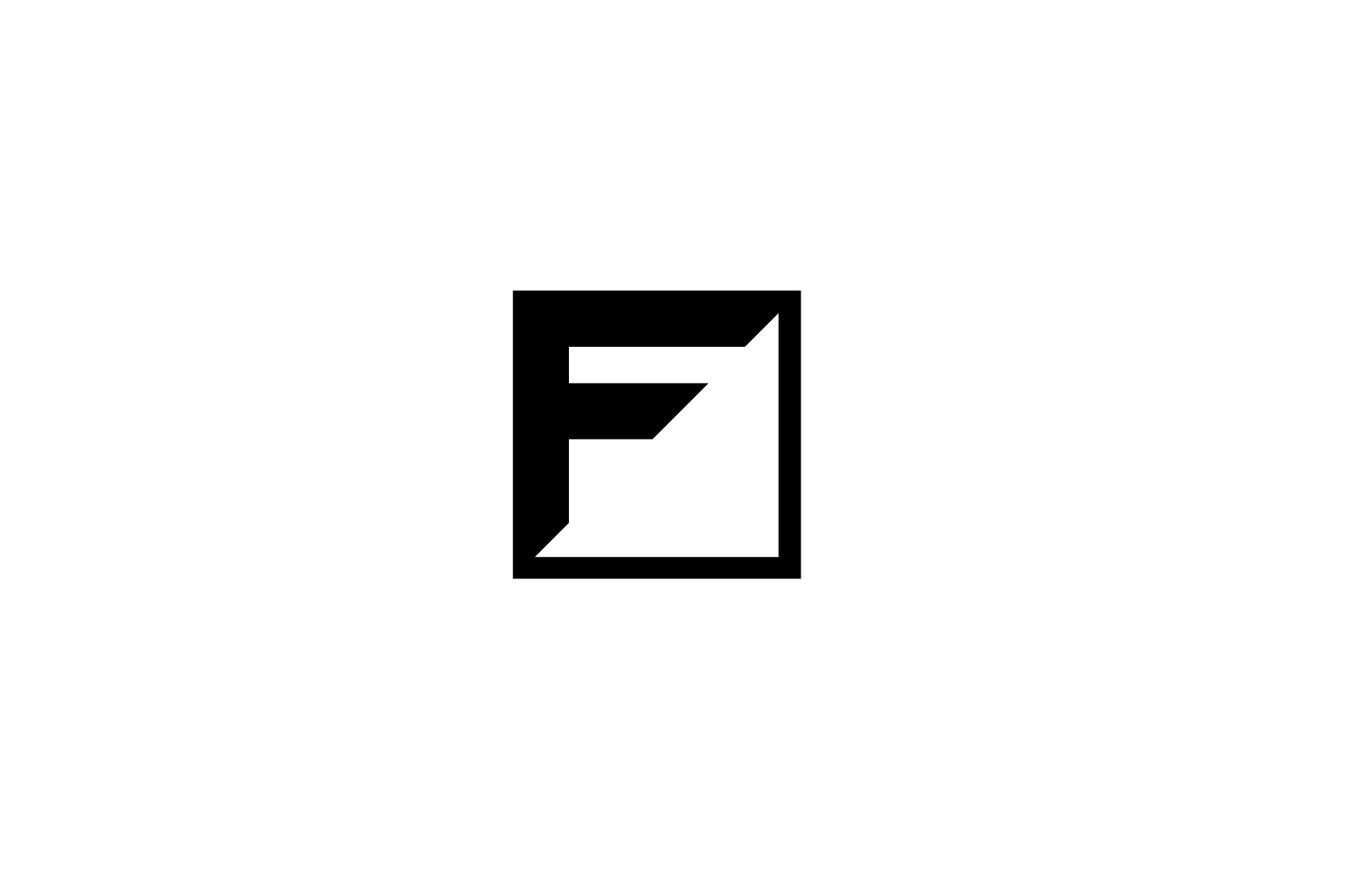 Alright, that looks interesting, but what if we rotated it at a 45 degree angle? 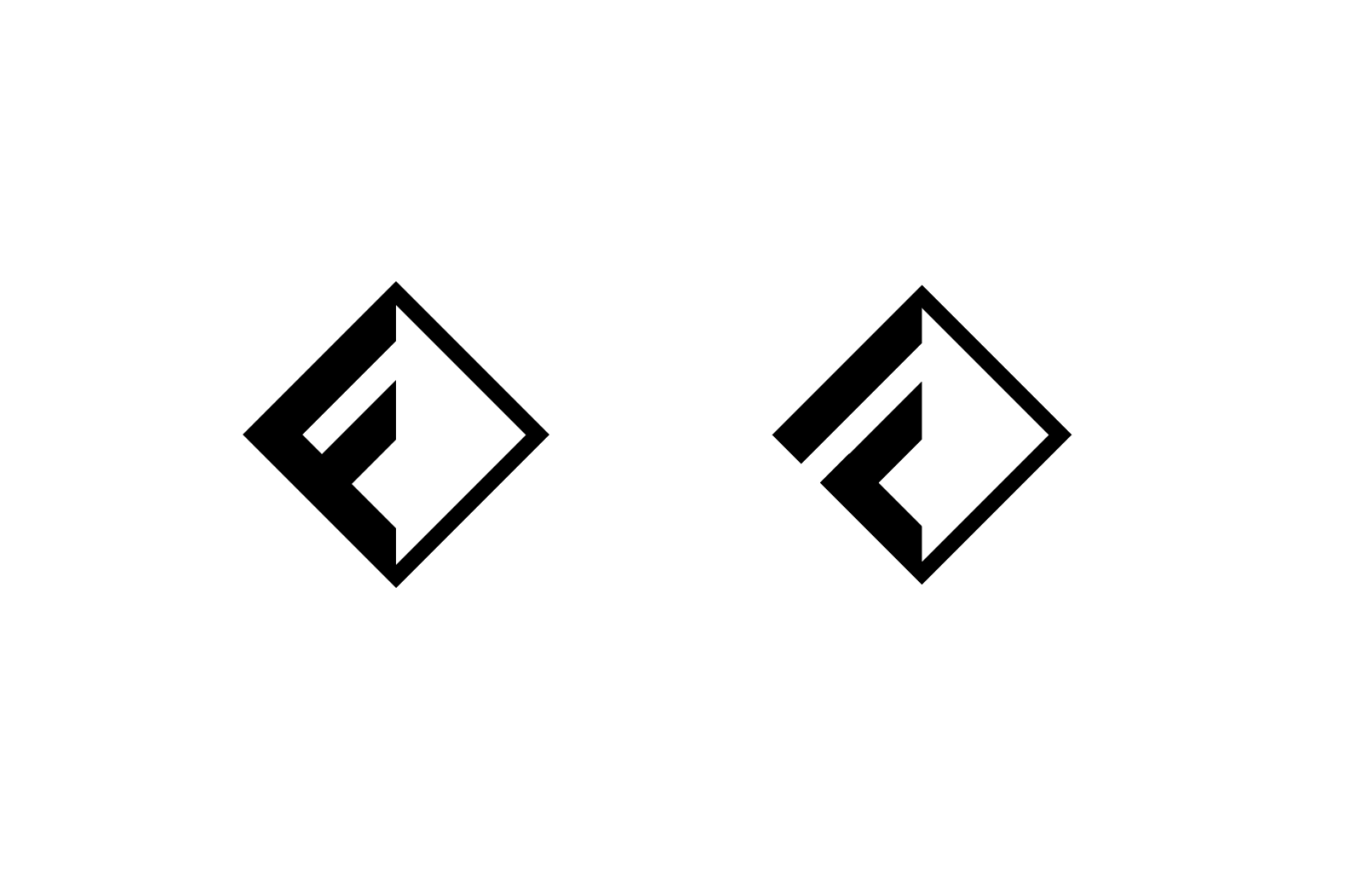 I added a second variation to the right, which provided for an entrance into the "fort" by separating a portion of the "F" while still making it identifiable, albeit in an abstract manner.

I presented the symbolism in the form below: 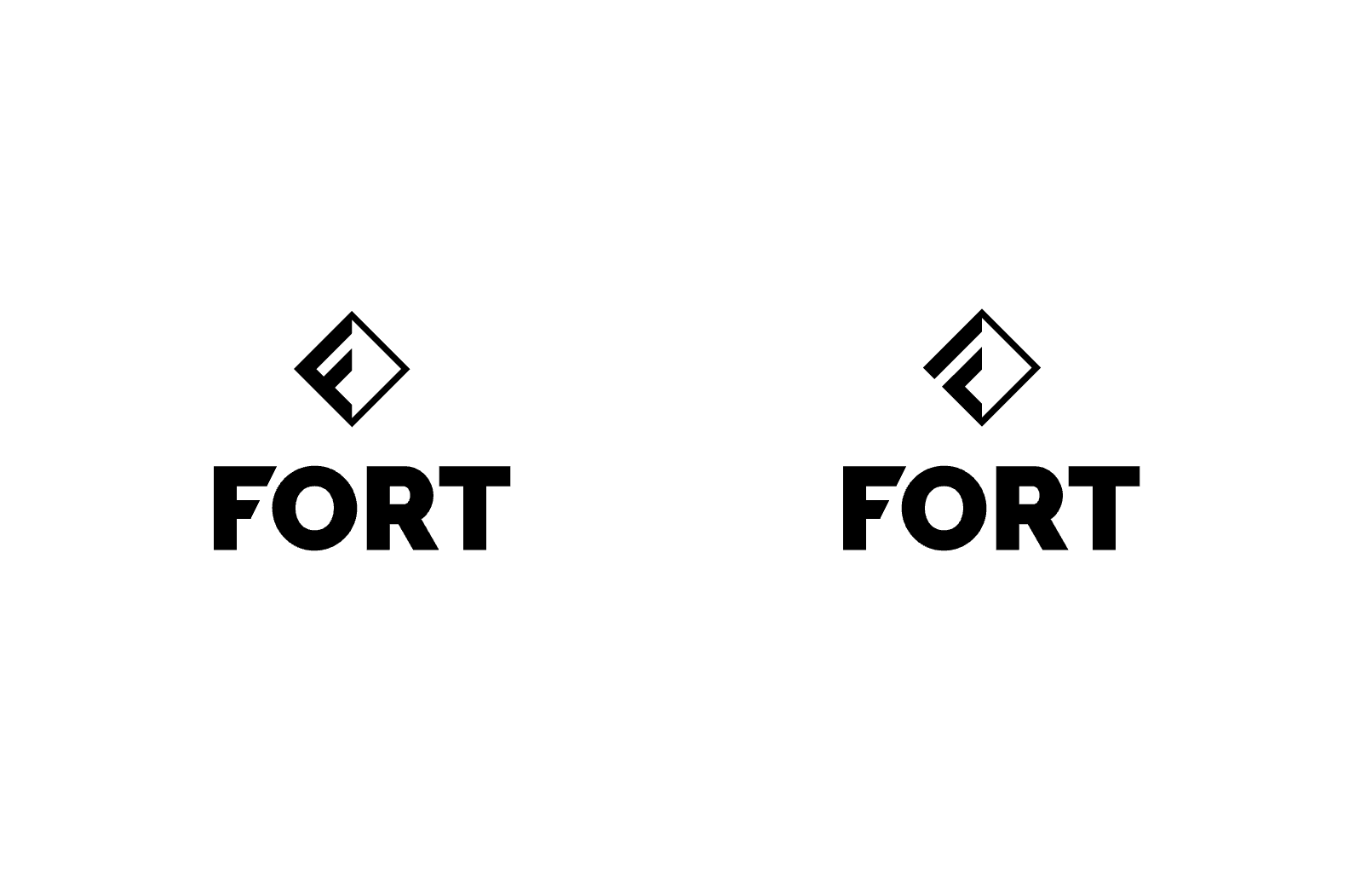 Here we have two variations as full combination logos. Notice that the wordmark here is much more simplistic than the wordmarks I presented earlier? That's because if you're going to use a combination logo, it's best to keep the wordmark simple as opposed to complex. I did slightly change the "F" here, but nothing else.

It's also helpful to present the client with an explainer graphic: 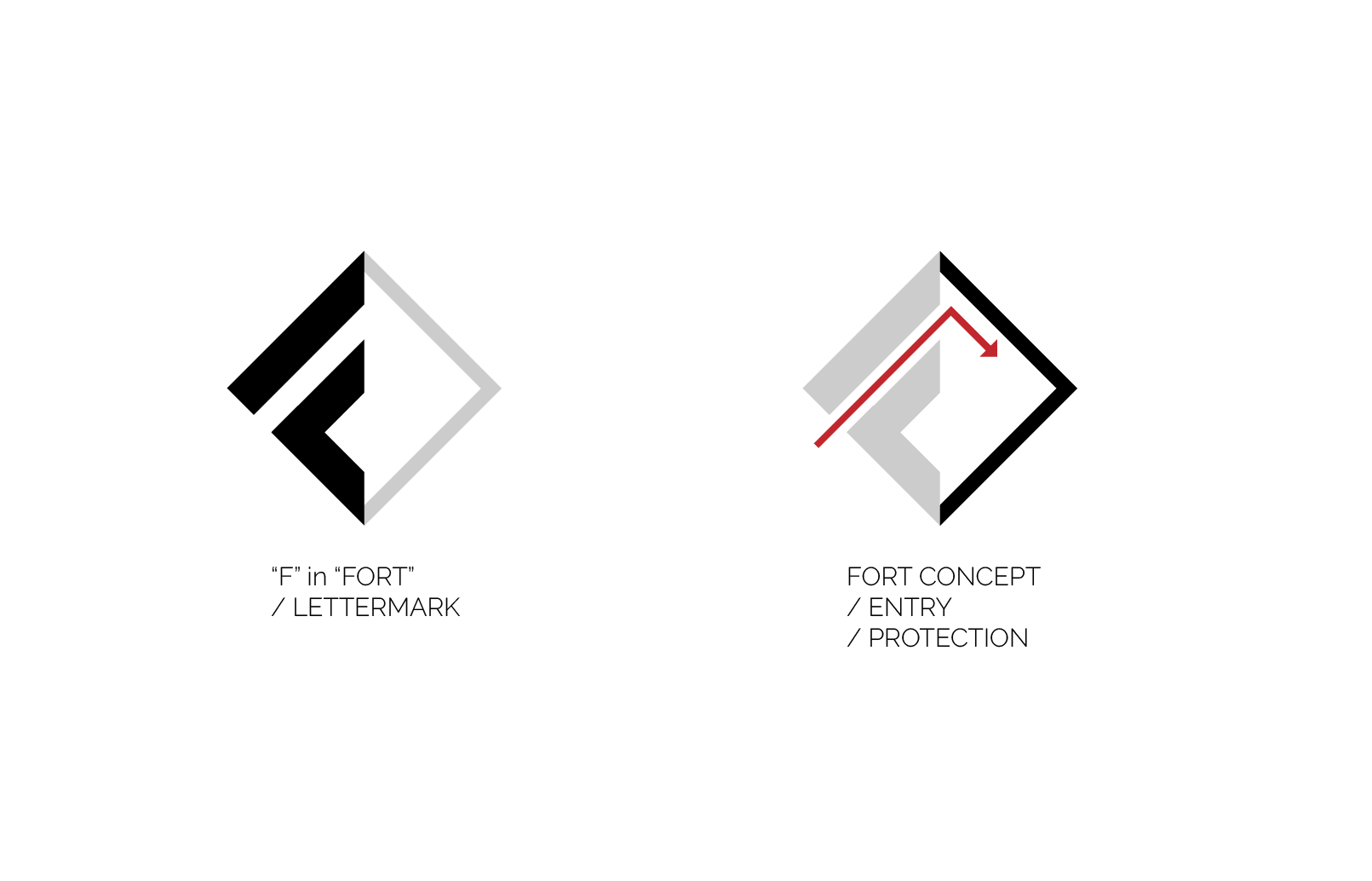 At the end of the day, they chose the above symbolism to represent ForT.

This is the process that I use to design most of my logo concepts. Hopefully you learned a thing or two!